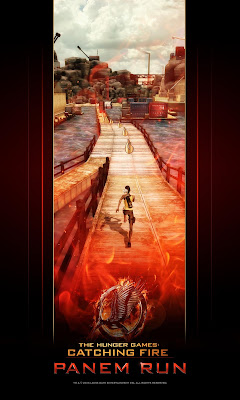 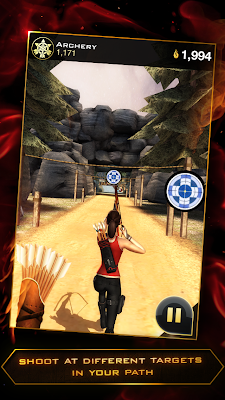 If you haven't heard, YES there is a Catching Fire game and YES it's totally awesome.

Panem Run is a runner game (like Temple Run), but out of all of those out there I truly believe this is the most fun. At the moment there are three districts you can run through: 4, 5, and 12. In addition to all the usual runner elements, you can do things like collect items to craft not only your powerups - but different arrows to use in the archery bonus round. Here's what we had to say about the game --

Courtney: Panem Run takes the typical runner game and customizes it extremely well to the The Hunger Games brand and even takes it a few steps further. Not only can you increase your power ups by collecting different items in different districts, you can craft different arrows for the archery section. The visuals keep you on your toes the farther you get, in which several moving parts of scenery that include district obstacles that can land in front of you at a second's notice. You can earn points for your district and race your friends (or strangers) via Internet. This game proves to be delightfully challenging, visually engaging, incredibly interactive (in all the good ways), all the while turning a runner into what all other runners should aspire to be.

Tiffany: Panem Run is a fun endless runner game that throws a social aspect in the mix. If you are familiar with Temple Run or Minion Rush, you’d get the idea. But it is the Facebook integration and social aspects that really help this game. If you connect the game to your Facebook AND you have been given a District via theCapitol.pn, you can play as a member of your District, and the Districts are ranked so you truly are representing your District when you play. You can also challenge friends or random players, and to me, that’s where the fun is. Trying to best your friends and strangers is what keeps me playing and wanting to score high. As far as weaknesses go, I’m hoping that they roll out more Districts soon, and I wish there was some way to customize your runner.

Denise: Panem Run is such a ridiculously fun game to play! I've been playing on my mom's iPad all morning. Though not all the districts are on there yet, running through the districts is a lot of fun and it shows you little things that make each district unique. My favorite (and I'm sure most people's favorites) is the times where you get to be an archer and shoot at the targets with your bow. You can also make unique bows with the sparks that you collect as well as increase your bonuses. I love that the flowers that you collect are Katniss, Prim and Rue flowers. This is an addictive running game that is infinitely better than other ones you will find. Can't wait to get max levels on all my stuff!

Janine: Panem Run is so good it gives me anxiety! I do not really know what to say about it except everything looks so cool and that I appreciate the level of difficulty (thus the anxiety) and that I have slept significantly less since the app has come out.

This is a very solid game for this franchise, and we hope that Hunger Games fans will start playing it so that Reliance Games is able to come up with new updates, hopefully new districts, and we'd also like to add that we'd LOVE to be able to unlock avatars of our favorite characters!

Check out the press release for the game:

Run, collect, and empower the Districts in the endless runner inspired by The Hunger Games movie series

LOS ANGELES – Nov. 21, 2013 Reliance Games, a leading international mobile game studio, and Lionsgate (NYSE: LGF), a leading global entertainment company, have brought the next chapter in The Hunger Games saga to mobile devices.
Based on the upcoming film The Hunger Games: Catching Fire, which opens in theaters worldwide on November 22, 2013, The Hunger Games: Catching Fire – Panem Run mobile game tasks players with running through the Districts of Panem, collecting Sparks and pursuing resources through the Districts. The game allows players to invite friends and fellow fans to see who can earn the most Sparks and bring honor to their District. Download the game on the App Store and Google Play.Watch the trailer.

The Hunger Games: Catching Fire – Panem Run features:§  Explore the Districts of Panem
§  Run endlessly as a member of your current District
§  Challenge and gift resources to friends
§  Compete to be on top of the leader board
§  Dodge, Jump and Smash through obstacles

“We are proud to be able to give fans of The Hunger Games films an opportunity to immerse themselves in the game,” said Manish Agarwal, CEO of Reliance Games. “The social features are a great way for the fans to connect with other fans worldwide.”

“Being able to play as a citizen of Panem further expands the world-building experience we’ve created for our fans,” said Danielle De Palma, Lionsgate Senior Vice President of Digital Marketing. “The game provides an exciting new narrative for the core fans while offering a challenge for players of all skill levels.”