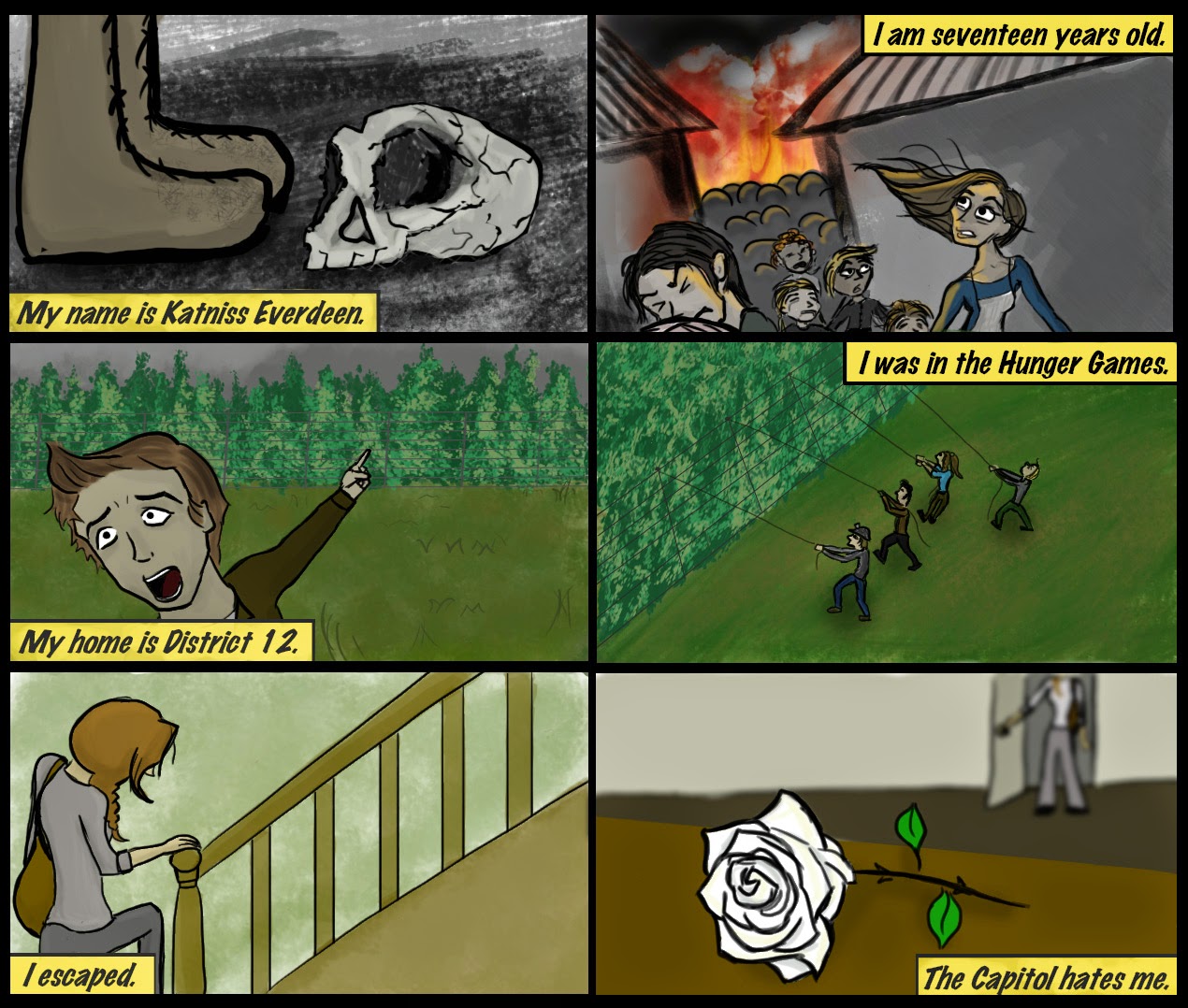 
The Hunger Games fandom is alive once again! IT LIVES!! LIKE THE MOCKINGJAY! We are getting ever so closer to the release of Mockingjay Part 1, and thought that a countdown event is in order. Every Friday starting today we will release a piece about each chapter in Mockingjay along with a bit of media such as the comic above. However, we’re not doing every chapter in the book, only where we think the book will be split. If you read our Mockingjay Mockup you know what exactly that is. That is not to say where it is to be officially split, obviously. We could be completely and terribly wrong, but as patient fans all we can do is speculate. We do hope you enjoy our Mockingjay Part 1 Countdown!

My name is Katniss Everdeen. I am seventeen years old. My home is District 12. I was in the Hunger Games. I escaped. The Capitol hates me. Peeta was taken prisoner. He is thought to be dead. Most likely he is dead. It is probably best if he is dead.

Things have changed drastically. District 12 is gone. Welcome to District 12? Pfft. GOODBYE District 12!! Katniss visits so she can see for herself and to come to grips with reality. The speech above is repeatedly used in Mockingjay, which I thought was a good starting point for the countdown. Doctors recommended that Katniss repeat simple facts about herself to keep her... shall we say... sanity in check.

Katniss not only deals with the physical toll of breaking out of the arena, but also feels responsible for all the deaths in District 12. She is mentally unstable and has an exorbitant amount of grief piled on top of her, IN ADDITION TO her emotional baggage left over from her first games. Side note: This is why people who complain about Katniss’ mental state in MJ drive me insane. Could YOU deal with the emotional toll and PTSD of a seasoned war veteran BEFORE the war even starts at 17 years old?

Everyone is broken, not just Katniss — Beetee, Finnick, Johanna, and Peeta to name a few. Most of them have deeper problems than just their electrical injuries. Everyone is in pieces, yet they have to come out of this war that just started alive and be victorious. It’s a daunting task, especially when Katniss is struggling with accepting the role of The Mockingjay. Peeta had said to her that he didn’t want to be a piece in their games, but it is already apparent that Katniss is another piece — this time in the rebels' games.

All this in the first chapter, and I haven’t even talked about the present that President Snow leaves in Victor’s Village. I would hope that the rose is the focal point to the opening of Mockingjay Part 1 but I suppose time will tell on that one. It will be interesting to see the turmoil of what is happening emotionally and physically to Katniss on her return trip to District 12 without any kind of voice over, but I trust that Francis Lawrence will do a great job of illustrating that to the audience.

What I hope to see the most out of this chapter is the frightening mental instability going on with Katniss during her tour. Upon stumbling upon the stocks and whipping posts Katniss’ hallucinations begin as she fights for control. This is coming from her PTSD that dates back to the beginning of Catching Fire, something we will be seeing a lot of in the next two films. To put it eloquently….. Shit’s about to get REAL.