HOLD ON TO YOUR BUTTS, TRIBUTES.

The continuation of our Mockingjay Countdown series is finally here for part 2 and..... it's very sad. Here we are, counting down the last Hunger Games movie. Seems like not too long ago, we were having book discussions on Tumblr and the rights had just been bought by Lionsgate. In honor of the last book, we kicked off this series where we examined the book chapter by chapter and created some kind of "art". We did some cool, silly, and weird things last year and we hope this time is no different! If you would like to check out chapters 1-12, please read our series from last year. Every week we will be posting a chapter starting from 13, and by the time we reach the end, the movie's release will be within a week.  We proudly present the Mockingjay Part 2 Countdown. 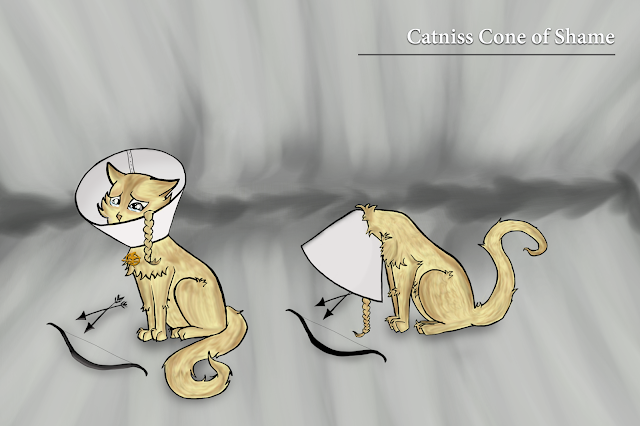 What do you get when you mix our love of cats, Mockingjay, and morbid humor?  The Catniss Cone of Shame. In the beginning of Ch 13, Katniss is dealing with a cold and obnoxious collar from her injuries that Peeta inflicted, which inspired the above drawing. WE LIKE CATS, OKAY?! So let's examine what else happens in this chapter...

The first few pages pretty much go over what the end of Mockingjay Part 1 explained, and the film did a pretty good job of addressing what a hijacking was. We see Prim becoming a well adjusted adult, followed by a seemingly harmless scene with Beetee and Gale designing war traps. WEE-OOO WEEE-OOO not an innocent scene in the slightest! Book readers are well aware of of how important this scene is, and I trust Francis completely to leave it in. If you're reading along with us, you will notice how painfully specific the human traps are described. It's another one of Suzanne's great discussion points: How far is too far?

The last big event in this chapter is the first interaction with Peeta since the incident. I think most people assume Delly Cartwright will not make an appearance in the film, but when it comes to Francis I always give him the benefit of the doubt. I am interested to see who they will substitute for Delly if she is cut out, or perhaps they will jump right to the Katniss interaction for time reasons. Either way, the scene is going to be unsettling seeing Peeta perceiving Katniss as a creation of The Capitol, not the girl he's grown up loving. Rereading this chapter is all the more intense reliving all of Katniss' emotions in her confused state. We've been with Katniss on her entire journey again and again, and experienced it through film over the last five years. Now that the films are ending, I can't help but feel Katniss' emotion ten times over as she realizes that Peeta has been conditioned to forget he loves her and even more horrifying-- that his true self might never return. Tissues, please.