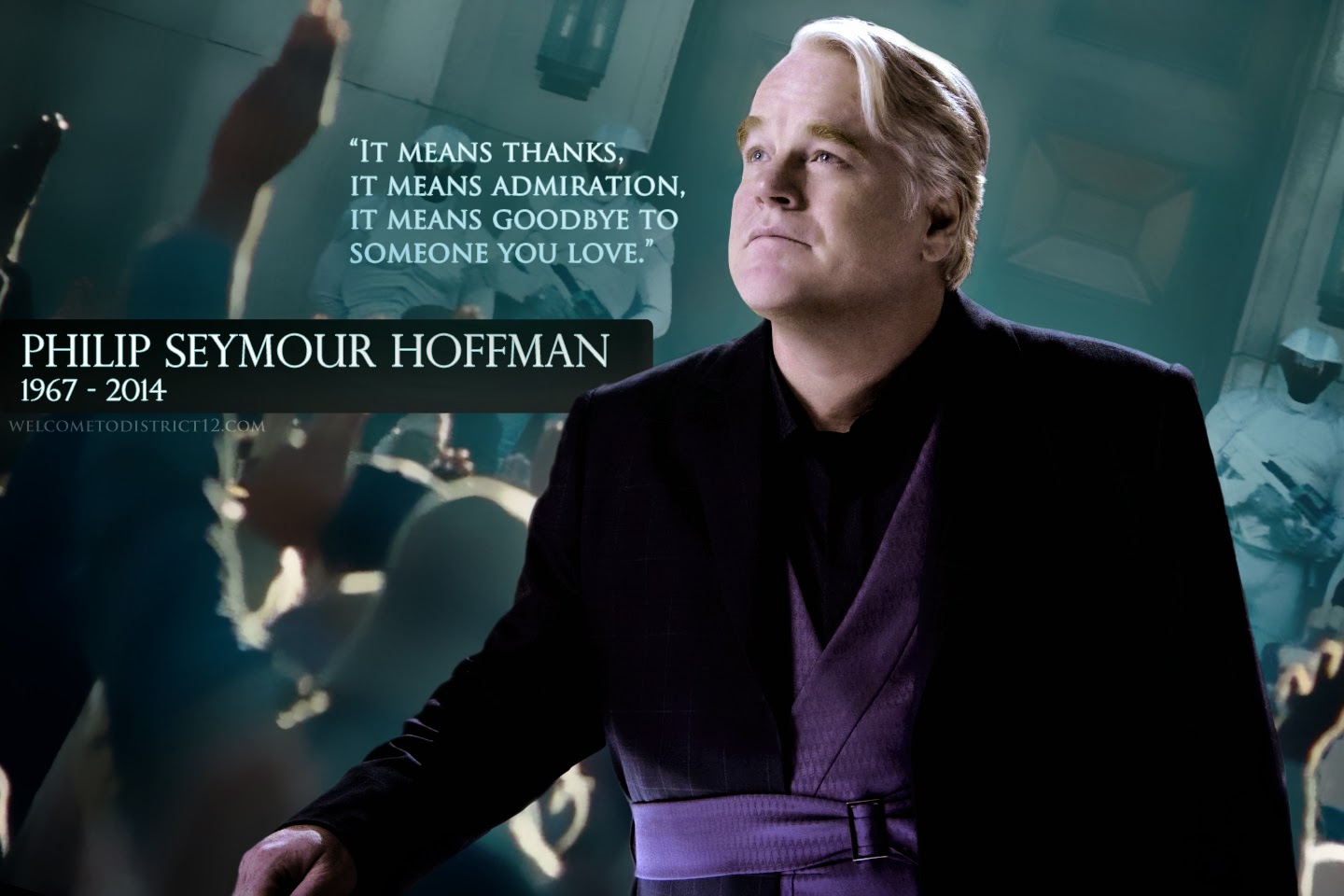 Tributes, we have lost a very important person this week. Philip Seymour Hoffman, our Plutarch Heavensbee has passed. According to this article, he was seven days away from wrapping for both Mockingjay movies. We are sure everything will work out on that end, but for now we would like to talk about our personal memories of Philip Seymour Hoffman and his great body of work.

I was unknowingly scrolling through my Tumblr dashboard when all of a sudden, I came across a post that said “RIP Philip Seymour-Hoffman.” I remember freezing and then frantically going through some news sites hoping to read about it being a prank. It took me a while to finally come to terms with it (to be honest, it’s still unbelievable to me now, and it’s extremely hard to think about what I am about to write about this man and use the past tense). The first movie I remember actively recognizing him in was Almost Famous. I was maybe 11 or 12 years old, watching William partying and then trying, and failing to get an important interview. I remember thinking that it wasn’t a good idea for him to be friends with the band, that he should have listened to Lester, Philip Seymour Hoffman’s character, and feeling justified when Lester tells him the same thing. I somehow always initially remember the feeling of “I told you so!” when he is brought up.

Philip Seymour Hoffman is a great actor who brought gravitas to every role he played, and I thought him as Plutarch Heavensbee was the best casting choice in the franchise since Jennifer Lawrence. I feel incredibly lucky to have seen him on the red carpet and celebrate Catching Fire with him. This is definitely a great loss, not just for the franchise, but for the acting community as a whole. My thoughts are with his friends and family. There is definitely no one else like him, and I hope his unparalleled talent continues to inspire actors to touch people’s lives through their art.

He is not explicitly in this gif, but this is what I will always remember when I think of him. "Aw man, you made friends with them..."

When I heard the news, my immediate thought after the initial disbelief is that we’ve lost one of the greats. He’s always been one of those actors who, no matter the role, commanded attention without trying, whether it be on stage or in film, from Dusty in Twister to Brandt in The Big Lebowski to Lester Bangs, Truman Capote, Artie Howe, the Count, Plutarch Heavensbee, well you get the picture. He was the kind of actor that when seeing him in a trailer for a movie was an instant draw for me. He’ll very much be missed, and I’m very sad that we won’t get to see more from such a talented actor in the years to come.

I am devastated about Philip Seymour Hoffman. In fact, I'm still convinced I am living in a nightmare that I am struggling to wake up from. When PSH was cast as Plutarch Heavensbee, it was one of the greatest things to happen to the Hunger Games franchise. Everyone was so humbled and grateful that this phenomenal actor agreed to portray an integral role in The Hunger Games story. I remember so much discussion that was had on HG Fireside Chat about Philip Seymour Hoffman being cast as Plutarch. Specifically it was Savanna and I that always talked about our EXTREME love for the actor, and joked about what we would do if we ever got to meet him. If I managed to see him at the Catching Fire after party, I was going to make a point to tell PSH what an honor it was to meet him, and that my friend Savanna said hi.

Philip Seymour Hoffman, aside from his phenomenal acting work, had a special place in my heart as Dusty in Twister, one of my favorite childhood movies. He touched so many people's lives with the different roles he has played, and he had so much more to offer with the vast amount of talent he possessed. My thoughts and prayers go out to all his loved ones and The Hunger Games cast and crew who are dealing with this huge loss. As much as I'm wondering if those seven days he had left held any IMPERATIVE scenes, and as much as I am torn inside as to specifically how this will affect the filming of my favorite book, I'm much too busy coming to terms with the fact that I've lost my Dusty.

Here's a highlight from HG Fireside Chat where they discussed Philip Seymour Hoffman being cast as Plutarch.

I was in disbelief when I read the news about Philip Seymour Hoffman’s passing. Though I was always familiar with PSH, other than in Almost Famous, I had not really seen him in anything until I was an adult. Capote was the first thing I saw him in that I walked away from with a sense of awe. He was one of those actors that you just can’t take your eyes off of. I will admit my first thought after the initial shock was being scared that his role as Plutarch would be affected. He was the most perfect casting and it’s so sad that only a few months ago I had the opportunity to see him mere feet from me looking so happy and being so sweet to his fans. I hope everyone will take this sad moment and use it as an opportunity to celebrate his art and talent. Our love for Philip will live on for a long, long time.

Here’s a clip of one of my favorite Philip Seymour Hoffman’s roles from Pirate Radio (a film you must check out!)