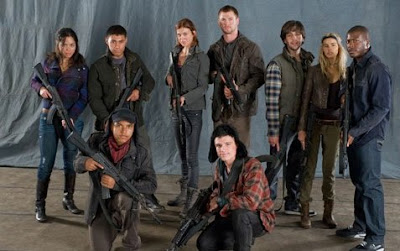 According to ComingSoon.net, they are setting "Red Dawn" to release sometime in 2012:

Following a steady series of setbacks, Red Dawn is finally going to see the light of day in 2012. The LA Times reports that FilmDistrict, the studio behind the recently-released Drive and the upcoming The Rum Diary, will release the remake sometime next year.

In the film, an American city awakens to the surreal sight of foreign paratroopers dropping from the sky – shockingly, the U.S. has been invaded and their hometown is the initial target. Quickly and without warning, the citizens find themselves prisoners and their town under enemy occupation. Determined to fight back, a group of young patriots seek refuge in the surrounding woods, training and reorganizing themselves into a guerilla group of fighters. Taking inspiration from their high school mascot, they call themselves the , banding together to protect one another, liberate their town from its captors, and take back their freedom.

Shot in 2009, the production fell victim to financial troubles at MGM, putting the release on hold. The last major update came earlier this year when it was reported that the invaders in the film were being re-edited to be portrayed as North Korean rather than Chinese in order to appeal to a broader international market.

Twiffidy and I are extremely excited about this movie coming out. We've had the opportunity to see it already, and it definitely has some great Josh moments. More importantly, assuming they don't cut it out, we are incredibly anxious to see the reaction of one particular scene that Peeta fans will enjoy. Glad to see it will be coming out soon!