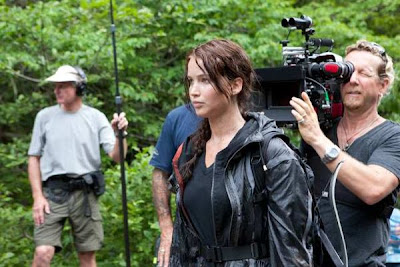 There's no question that "The Hunger Games" is one of the most highly anticipated films due for release next year. But distributor Lionsgate is hoping that the frenzy of excitement will expand beyond the core audience of young adult readers who initially flocked to Suzanne Collins fantasy action series -- and they're making a big financial bet to demonstrate their commitment to the project, which stars Jennifer Lawrence as protagonist Katniss Everdeen. Once conceived as a mid-budget movie for young adults, "The Hunger Games" is now a nearly $100-million production aimed at fans of all ages.

Lionsgate first acquired movie rights to Collins' books in early 2009, when "The Hunger Games" had sold fewer than 500,000 copies. Since then, the trilogy has reached more than 12 million copies in print and become popular with a much broader audience, despite the young age of Katniss and others who compete to the death in the titular games.

As a result, the studio has expanded the budget for the movie and believes it will reach a much broader audience. The production, which wrapped in North Carolina on Saturday, was nearly $100 million, a figure brought closer to $80 million after tax credits.

See the story in Tuesday's Times for much more on production of "The Hunger Games" and what its potential success means for Lionsgate.