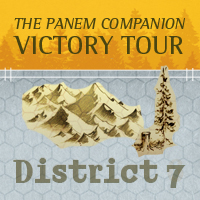 We are honored to announce that we are the District 7 stop on the Panem Companion Victory Tour!

To read our review of The Panem Companion by V. Arrow, CLICK HERE.

We are very excited about this district since we are big Johanna fans, but Courtney also first came into this world close to Yosemite National Park so she has a big affinity for trees. HUZZAH District 7!

Thanks to Smart Pop Books, not only will we be showing you an exclusive excerpt from the book, but at the bottom you can enter to win your very own copy!

This victory tour being held for The Panem Companion is touring all the districts (fan sites), so keep an eye out for future stops, exerpts, and book giveaways!


District 7 – Excerpt from The Panem Companion by V. Arrow

“The question of Prim’s parentage is a significant point of analytical fandom debate.
Is blonde-haired, blue-eyed Prim really the “passes”-for-merchant biracial daughter of
darkhaired Mr. Everdeen? Or should Prim really be Primrose Mellark? There are staunch supporters on both sides of the issue . . .

“Some of the most compelling pieces of evidence for Prim’s potential Mellark lineage
come from the subtle ways that the Mellarks have become integral to the Everdeens’
family life and the similarities between Prim and the Mellark men (but not Mrs. Mellark,
with her unspeakable cruelty; it could even be inferred that both Prim and Peeta got their gentle natures from Mr. Mellark for precisely this reason: both Mrs. Everdeen and Mrs. Mellark are written very negatively, as emotionally distant and, in Mrs. Mellark’s case, physically abusive).”

“Although Mason generally refers to stonelayers when derived from French, the Old
English mason means to make. Considering that Johanna is from District 7 and their
specialty is lumber and forestry, it’s unlikely that the connection to stonemasonry is the
inspiration for her last name. Given her involvement in the Quell plot and the Second
Rebellion, it is more probable that her surname refers to the Freemasons, an international fraternal organization sometimes referred to as a secret society.

“Freemasonry ‘uses the metaphors of operative stonemasons’ tools and implements . . .
to convey what has been described by both Masons and critics as ‘a system of values
and beliefs veiled in allegory and illustrated by symbols.’ They are also dedicated to the
principles of liberty, equality, and the pursuit of truth, just like Panem’s rebels—like
Johanna.

“Another potential origin is the mathematical Mason’s Rule, which deals with the
transfer of equilibrium in a branch of engineering and mathematics called control theory.

“Johanna is a German name, and is different from the English Joanna in both origin
and meaning. Joanna means God is gracious. Johanna, however, means God is merciful
or God’s merciful gift—ironic, given Johanna’s original Games strategy, as related by
Katniss: show no mercy.”