Conan O'Brien posted this on his facebook page earlier: 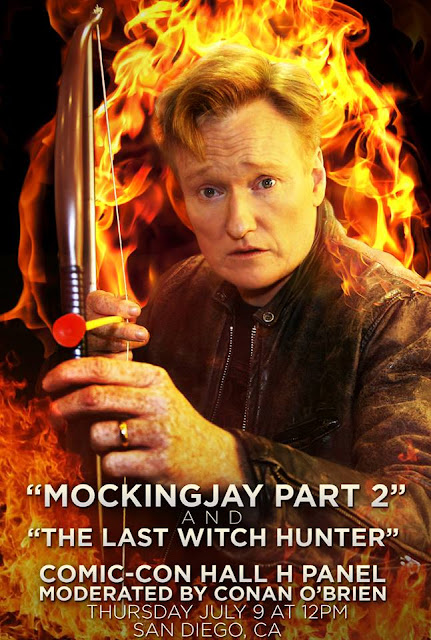 YOU READ THAT RIGHT! There will MOST DEFINITELY be a Mockingjay Part 2 Panel at Comic Con this year! AND it'll be moderated by Conan O'Brien! It'll be on Thursday, July 9 at 12 noon at Hall H, so if you guys are going to comic con, adjust your schedules accordingly! Tiffany and Courtney will be there as well with updates!

The panel will include Q&As with some of the cast and the filmmakers (no official word yet on who's going to be there) as well as some exclusive footage from the movie.

In addition to the panel, people can also check out the Lionsgate booth (Booth #4045) where they are sure to have some promotional stuff (like new Mockingjay pins maybe) and a lot of cool displays. You can check out the Comic-Con website for more info, and also the press release after the jump.

SANTA MONICA, Calif, June 11, 2015 – Lionsgate (NYSE: LGF), a premier next generation global content leader, will give Comic-Con® 2015 attendees two exclusive looks at the studio’s most anticipated fall film releases, “The Hunger Games: Mockingjay – Part 2” and “The Last Witch Hunter,” during a panel that will feature Q&As with the stars and filmmakers of both movies to be moderated by Emmy® Award-winning comedian and talk show host Conan O’Brien. The star-studded Lionsgate panel and exclusive reveals will take place in Hall H on Thursday, July 9 from 12:00-1:15 p.m.

Additional details regarding the panel:

The Hunger Games: Mockingjay – Part 2 – a must-see for all, this panel will provide a sneak peek into the powerful final chapter of the epic “The Hunger Games” film franchise. Attendees will be shown never-before-seen footage from “Mockingjay – Part 2” and treated to a Q&A session with the cast and filmmakers, who will reveal details of the big screen finale.