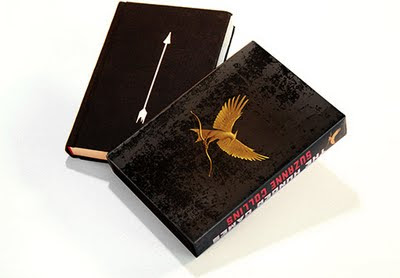 Here, for the first time, is Scholastic’s cover (front and back) for The Hunger Games Collector’s Edition. That’s ordinarily the kind of thing that wouldn’t make the news. But what’s so arresting about the new slipcovered volume is the way the mockingjay image—the symbol of Suzanne Collins’ whole series—has been recast. "It’s been fun for the art director and me to revisit the mockingjay images,” Scholastic editorial director David Levithan told EW. “Amazingly, we chose the mockingjay image for the first book before we knew how crucial it would be in the trilogy, and we concepted the cover directions for Catching Fire and Mockingjay before we’d read a word of either book.” He adds, “Now we have the opportunity to go back and create new icons for each book. The Hunger Games Collector’s Edition shows a mockingjay in flight holding a bow, outside of the pin image featured on the original book, teasing the active role it’s going to play.”

The book, which will cost $30, goes on sale in November.