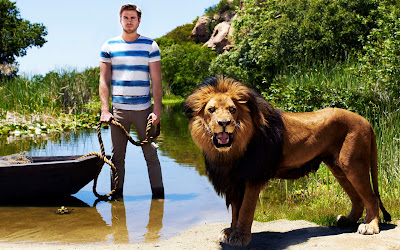 Liam Hemsworth was in the Philippines to promote the clothing line Bench/, and during his press event there, he answered a few questions about The Hunger Games: Catching Fire.


7. He says that it isn’t an act: Jennifer Lawrence, his "Hunger Games" and "Catching Fire" co-star,truly is "amazing."

“She’s one of the most energetic, fun-loving people I’ve ever met. Working with her on set is just easy because she’s so good and she’s just won all these huge awards so congratulations to her for that. She’s amazing.”

8. Liam gets “whipped” in "Catching Fire" — literally.“My character [Gale] gets whipped in this one. So I spent a couple of days on my knees getting whipped, which was pretty horrific.”

9. "Catching Fire" is turning out to be even better than "The Hunger Games."“There’s a whole lot of great stuff in 'Catching Fire.' The characters are developing more; (director) Francis Lawrence had a whole new take on it.”

via DWTC
Posted by Tiffany at 2:19 PM