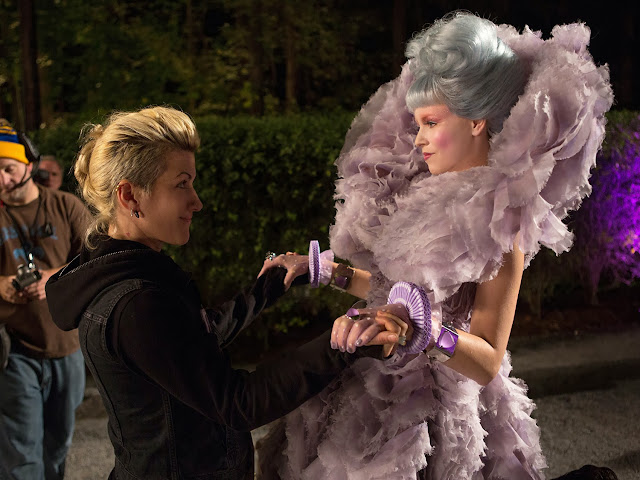 MTV News chats with Trish Summervile about dressing "daring dames," Katniss' wedding dress, Finnick's parade outfit (was it too 'Chippendales' for a PG-13 movie?), her favorite costume for the movie and much much more! Here are some highilghts

MTV: I’d like to talk about a few pieces in particular, starting with the wedding dress. The description in the book is a little different, so what was your jumping-off point?

Summerville: Well, for the wedding dress, at one point, I was terrified because I think in the book it says there are 18 dresses that come. And I thought, “Oh my god. How are we going to get 18 wedding dresses that fit this?” In the script, with the time frame, we shot one dress. For that, a couple of years ago, I found this designer, Tex Saverio. who’s from Jakarta. I was really drawn to the designs that he did and just hoped one day this would be something. I thought, honestly, I thought more like, I’ll do an editorial where I can run that, because you can be much more free and extreme. When this project came along, and I knew that we needed this wedding dress, he was kind of one of my go-to people.

We had some Skype meetings, and I had an illustrator do an illustration taking a few different parts of dresses he’d done and compiled them together with the color scheme we needed and changed up fabrications for our practical reasons. He and I had these Skype meetings back and forth, and he was so great and so fast. He’d be like, “Let me sketch something, and I’ll call you back.” And a few hours later, I’d get an email of some kind of modified sketch.

[I explained] to him how I needed the cage to kind of have the inflection of fire going up around her face and doing crystals on that and what color the crystals should be and then having these laser-cut feathers put on, so that it’s subtle… And then with that, the fabrication of the skirt could be — we needed all this volume, but we needed it to rise when she starts to spin around. And that was a little bit perplexing for him because his dresses are so many layers, and he does a very couture type of work… It’s not really for function. It’s just for your day and beauty and a gown. And he was just great. And then on the first day, we tried the dress on her, and we had her spin, and it was like this “Ahhhhhhhh.”

MTV: And Finnick's tribute parade outfit is going to be a little different as well? Not just a strategically placed knot of fishing net?

Summerville: You know, we're PG-13. [laughs] We went to Suzanne to see if this is something we have a little liberty to change, because in your mind, you can imagine that as grand as you can, but to try to take that on to film, it doesn't work sometimes. What we ended up deciding on was keeping true to the net. It's a fishing net. It's made of gold fabric. It's knitted-together net, and I made him kind of a kilt. It's more like a gladiator-type skirt, so he has that on, and it's belted, and he has the shells on his neck, which he keeps the whole time. My backstory between Sam and I was that Annie — who he had to leave — it's this necklace that Annie's made for him so that she's always with him when he's away. He keeps it on the whole time ... He was really relieved he has a longer skirt, and he kind of has tights underneath and kind of substantial boots. He's bare-chested, and he worked really hard to get into amazing shape ... I think it's much more interesting than just the net. It would have been a little too Chippendales.

Read the rest of the artcile here 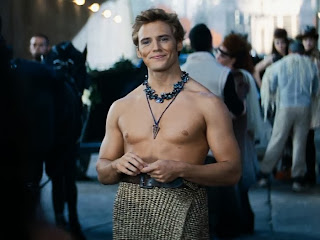 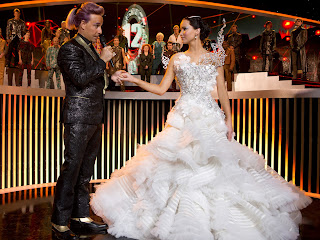 Which costume do you think will be YOUR favorite?