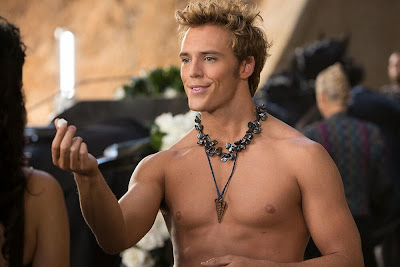 So this is super cool -- Yahoo! consulted with Hunger Games fan sites (us included, WEEEE!) to discuss a Catching Fire book to film breakdown. Like so many others, we are THRILLED with the film (review coming very soon!) so we were totally stoked to weigh in on what book scene we liked the most and what scene we wish could have made the cut:

"Out of all the book-accurate scenes to choose from, my favorite book-to-film scene would have to be the classic sugar cube scene," said Courtney Custodio, co-founder of WelcometoDistrict12.com. "Sam Claflin not only delivers his lines exactly how I imagined them, but the script for this scene is word-for-word out of the book. It warms my heart to know that Francis Lawrence and all those involved in making this scene come together honored the fan's intense desire to see Finnick's character come to life. I also appreciate the way he sticks the sugar cube in his mouth and saunters off which provides some great comic relief."

"I really wanted to see Haymitch's Games if only to gain a fuller sense of his character," said Custodio. "I love the idea that he also won his Games in a rebellious fashion, but more importantly it is because he, sadly, was the example. It cost him everyone he loved. The 'Catching Fire' film is character-driven, so I'm sure Francis Lawrence thought seriously about whether or not that would make the cut. Given the pace of the film, it seems to me perhaps that was a good decision for it even though we didn't get to see it unfold."


Read the whole "Fan"tastic article over at Yahoo! movies to see what sites such as Mockingjay.net, HGGirlonFire, Down With The Capitol, and The Hob had to say.
Posted by Welcome to District 12! (Courtney) at 8:00 AM