Reliance Games and Lionsgate have announced Catching Fire - Panem Run - and endless running game where you, as a citizen of Panem, spread hope through the districts by collecting sparks and materials Katniss has left behind. It won't be as easy as you think though, as you have to dodge obstacles and swarms of Tracker Jackers as you navigate through all 12 districts. Coming this november to a smartphone or tablet near you! 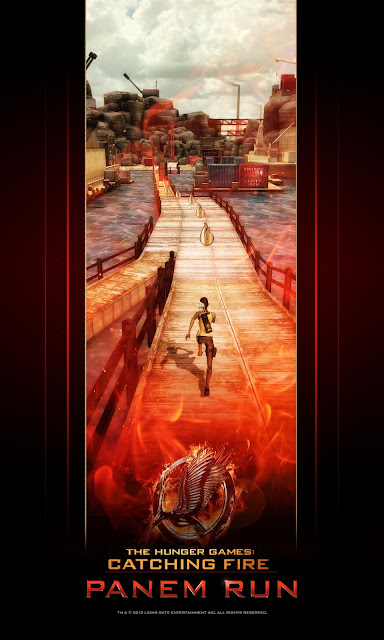 “With its epic story of struggling for survival, The Hunger Games franchise lets us recreate the competitive world of Panem in a social mobile game,” said Manish Agarwal, CEO of Reliance Games. “In partnering with Lionsgate, we’ll build a community of Hunger Games fans, teaming up to face unique challenges together as they run through the Districts of Panem.”

The Hunger Games: Catching Fire – Panem Run will be available this November on smartphones and tablets.

YOU GUYS! We are so unbelievably excited for this game! Look at that screenshot! (Also, check out what district that is! What do you think the other districts will look like?) For those who don't follow us on our personal tumblrs or twitters, we are into games. A lot of them. As a fan of endless running games myself (Hunger Games: Girl on Fire, Temple Run, Jetpack Joyride, Subway Surfers, and my personal favorite, Minion Rush), I can already tell that this game is going to be AWESOME!!!
Posted by Janine at 11:58 AM