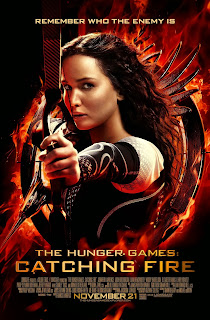 Today, The Hunger Games: Catching Fire passed the $400 million mark, making it the 5th fastest movie to do so.

From The Hollywood Reporter:


"Lionsgate's YA adaptation starring Jennifer Lawrence andJosh Hutcherson earned $1.7 million on Thursday night to bring its domestic cume to $400.1 million in just 42 days. The previous film in the franchise, The Hunger Games, took 80 days to reach the same milestone after opening in March 2012.

Directed by Francis Lawrence, the sequel is the fifth fastest film ever to hit the $400 million mark, behind The Avengers (14 days),The Dark Knight (18 days), Avatar (23 days) and The Dark Knight Rises (29 days).

Internationally, Catching Fire has earned $408 million to date for a worldwide tally of $808 million, easily surpassing the $691 million total of the previous film."

Check out the rest of the list here.
Posted by Tiffany at 5:32 PM