Mockingjay Part 1 to be released in IMAX 3D PRESS RELEASE 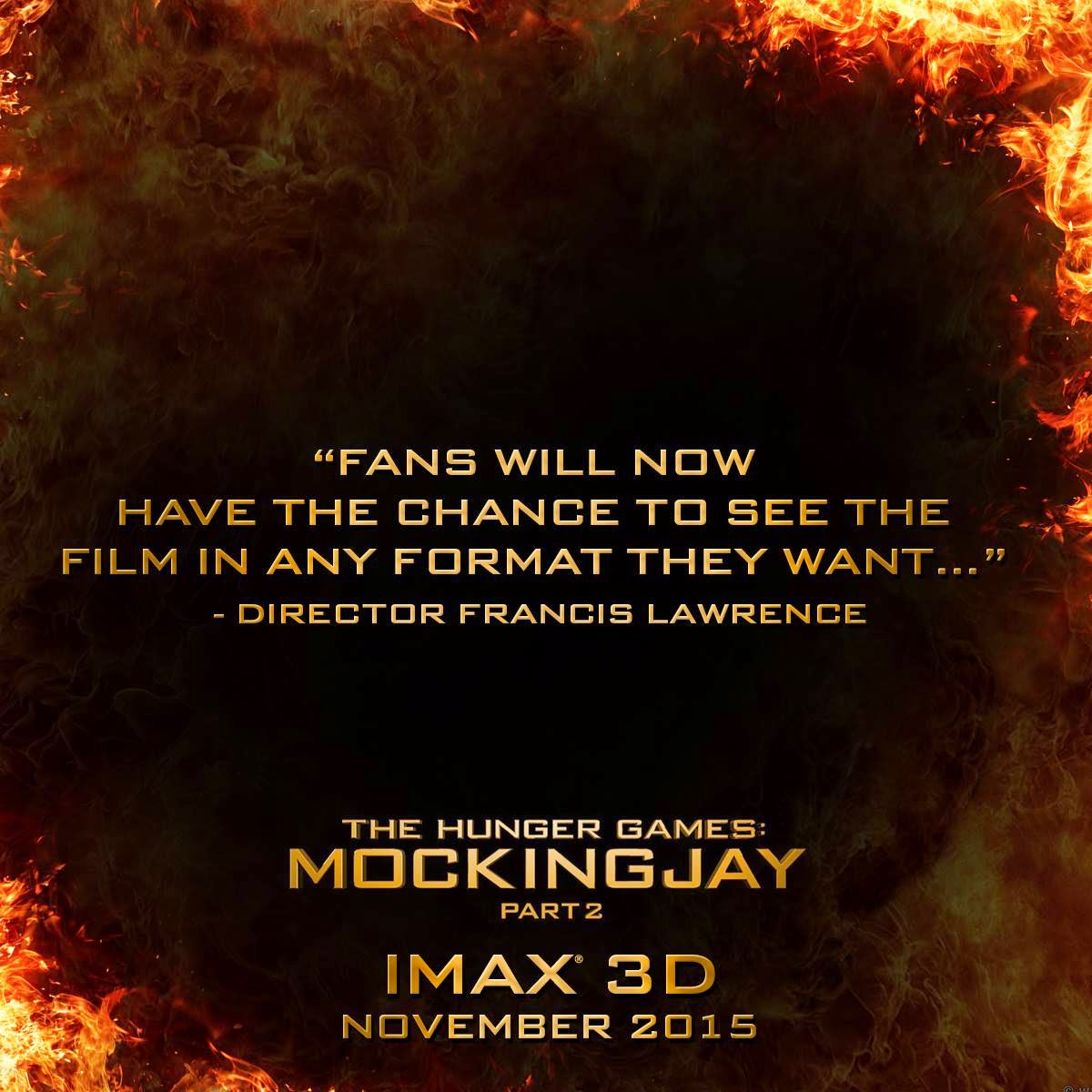 “I’m thrilled Mockingjay – Part 2 will be in IMAX theaters,” said director Francis Lawrence. “Fans will now have the chance to see the film in any format they want, which is exciting; we recently saw the 3-D version of Mockingjay – Part 1 before its release in China, and the new level of immersion was really fantastic.”

“It’s exciting to be back in The Hunger Games world and once again team up with our partners at Lionsgate, director Francis Lawrence and producers Nina Jacobson and Jon Kilik on what we believe will be a thrilling, action-packed finale to this blockbuster franchise,” said Greg Foster, Senior Executive Vice President, IMAX Corp. and CEO of IMAX Entertainment. “The fan enthusiasm and cultural impact that this series has generated has been truly remarkable and we are thrilled to offer audiences the opportunity to experience the last chapter in IMAX 3D.”

The IMAX® 3D version of The Hunger Games: Mockingjay – Part 2 will be digitally re-mastered into the image and sound quality of The IMAX Experience® with proprietary IMAX® DMR (Digital Re-mastering) technology. The crystal-clear images, coupled with IMAX’s customized theatre geometry and powerful digital audio, create a unique environment that will make audiences feel as if they are in the movie.
The blockbuster Hunger Games franchise has taken audiences by storm around the world, grossing more than $2.2 billion at the global box office, and it was the #1 movie of the year two years in a row domestically. The Hunger Games: Mockingjay – Part 2 now brings the franchise to its powerful fourth chapter in which Katniss Everdeen (Jennifer Lawrence) now fully realizes the stakes are no longer just for survival -- they are for the future.

With the nation of Panem in a full scale war, Katniss confronts President Snow (Donald Sutherland) in the final showdown. Teamed with a group of her closest friends – including Gale (Liam Hemsworth), Finnick (Sam Claflin), and Peeta (Josh Hutcherson) – Katniss goes off on a mission with the unit from District 13 as they risk their lives to stage an assassination attempt on President Snow who has become increasingly obsessed with destroying her.  The mortal traps, enemies, and moral choices that await Katniss will challenge her more than any arena she faced in The Hunger Games.
The Hunger Games: Mockingjay – Part 2 is directed by Francis Lawrence from a screenplay by Peter Craig and Danny Strong and features an acclaimed cast including Academy Award®-winner Jennifer Lawrence, Josh Hutcherson, Liam Hemsworth, Woody Harrelson, Elizabeth Banks, Philip Seymour Hoffman, Jeffrey Wright, Willow Shields, Sam Claflin, Jena Malone with Stanley Tucci and Donald Sutherland reprising their original roles from The Hunger Games and The Hunger Games: Catching Fire. The impressive lineup is joined by The Hunger Games: Mockingjay – Part 1 co-stars five-time Academy Award®-nominee Julianne Moore, Mahershala Ali, Natalie Dormer, Wes Chatham, Elden Henson and Evan Ross.
###

The next installment of the record-breaking franchise, The Hunger Games: Mockingjay – Part 2, will be released on November 20, 2015, directed by Francis Lawrence and starring Academy Award® winner Jennifer Lawrence, Josh Hutcherson, Liam Hemsworth and Woody Harrelson.
ABOUT LIONSGATE
Lionsgate is a premier next generation global content leader with a strong and diversified presence in motion picture production and distribution, television programming and syndication, home entertainment, digital distribution, channel platforms and international distribution and sales. The Company currently has more than 30 television shows on over 20 different networks spanning its primetime production, distribution and syndication businesses, including such critically-acclaimed hits as the multiple Emmy Award-winning Mad Men and Nurse Jackie, the comedy Anger Management, the broadcast network series Nashville, the syndication success The Wendy Williams Show and the critically-acclaimed hit series Orange is the New Black.

Its feature film business has been fueled by such recent successes as the blockbuster first three installments of The Hunger Games franchise, the first installment of the Divergent franchise, John Wick, Now You See Me, Roadside Attractions' A Most Wanted Man, Lionsgate/Codeblack Films' Addicted and Pantelion Films' Instructions Not Included, the highest-grossing Spanish-language film ever released in the U.S.
Lionsgate's home entertainment business is an industry leader in box office-to-DVD and box office-to-VOD revenue conversion rates. Lionsgate handles a prestigious and prolific library of approximately 16,000 motion picture and television titles that is an important source of recurring revenue and serves as the foundation for the growth of the Company's core businesses. The Lionsgate and Summit brands remain synonymous with original, daring, quality entertainment in markets around the world. www.lionsgate.com

IMAX, an innovator in entertainment technology, combines proprietary software, architecture and equipment to create experiences that take you beyond the edge of your seat to a world you've never imagined. Top filmmakers and studios are utilizing IMAX theatres to connect with audiences in extraordinary ways, and, as such, IMAX’s network is among the most important and successful theatrical distribution platforms for major event films around the globe.  IMAX is headquartered in New York, Toronto and Los Angeles, with offices in London, Tokyo, Shanghai and Beijing.  As of September 30, 2014, there were 880 IMAX theatres (751 commercial multiplexes, 19 commercial destinations and 110 institutions) in 60 countries.  IMAX®, IMAX® 3D, IMAX DMR®, Experience It In IMAX®, An IMAX 3D Experience®, The IMAX Experience® and IMAX Is Believing® are trademarks of IMAX Corporation. More information about the Company can be found at www.imax.com. You may also connect with IMAX on Facebook (www.facebook.com/imax), Twitter (www.twitter.com/imax) and YouTube (www.youtube.com/imaxmovies).
Posted by Welcome to District 12! (Courtney) at 1:03 PM