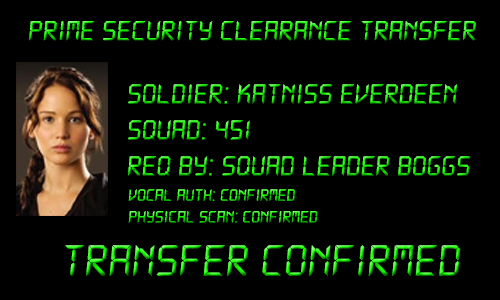 If you read Chapter 19 of our countdown, you would know that that chapter ends with Boggs losing his legs. This chapter (obviously) starts immediately after that. Boggs knows this is it for him, so he transfers control of his Holo to Katniss so she can continue her own mission. "Don't trust them. Don't go back. Kill Peeta. Do what you came to do." We're gonna miss Boggs.

Boggs stepping on a pod started a chain reaction of, well, more pods. Horrifying, of course, but it's probably going to look really cool on-screen. What appears to be black tar spews out from the street and threatens to engulf everything, the barbed wires that kill Mitchell (RIP Mitchell) after Peeta throws him off for trying to restrain him after he attempts to kill Katniss in the midst of all the chaos, fumes and a bunch of other things. There's just so much going on and it'skind of hard to keep track of everyone (personally, I almost missed Mitchell. Sorry Mitchell!) so it'll definitely be a high-action sequence that'll keep everyone at the edge of their seats, maybe similar to the scene in the previous movie when they rescued the tributes from the Capitol while Katniss was talking to Snow.

The group reconvenes in an abandoned house and Peeta is cuffed and locked in a closet for now. Jackson tries to assume her (rightful) place as squad leader, but Katniss has access of the holo now, and she tries to convince Jackson that Boggs left her in charge because Coin gave her a special mission. Jackson doesn't really believe Katniss until Cressida backs her up. Cressida is obviously a better on-the-fly liar than Katniss, because Jackson acquiesces and then they're off. They walk through the destruction left by the pods that tried to kill them, and also other pods that have been triggered by the black tar, and they go into another house where they find out from an emergency broadcast that they're presumed dead. The initial explosion of course caught the Capitol's attention, and Peacekeepers were sent to gun their old hideout down. Katniss, Finnick, Boggs, Peeta, Cressida and Gale were specifically identified.

This is great for their mission, but not only does the Capitol think they're dead, but also the people back in District 13. We will probably get to see their families react to the heartbreaking news. Maybe even Plutarch and Coin discussing new strategies now that the Mockingjay and the other tributes are dead. Or Coin addressing the rebels and using Katniss' death to motivate them to push harder. Or maybe she's just in her office smirking because her plan to kill Katniss has worked as far as she knows.

While Katniss and her team are discussing what to do next, Peeta, who seems to be back in his right mind suggests that they kill him.

Spoiler alert: they don't kill Peeta BUT there is another painful death next chapter. See you next week!
Posted by Janine at 9:00 AM