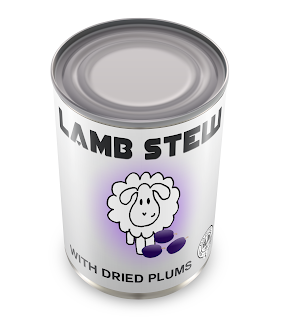 And we're back counting down to the release of The Hunger Games: Mockingjay Part 2. This week we pick up right where Chapter 20 left off.

To recap, Peeta had pushed Mitchell off him and into a trap that killed him, and he declared that the next step for them was to kill him. Chapter 21 continues right after he says that, and the entire Star Squad refuses. The  conversation reminds Katniss of a verse of The Hanging Tree, which further emphasizes the symbolism in the song. While it's unlikely this connection will be made so explicitly in the movie, it would be great hear a couple of notes from The Hanging Tree somewhere in this scene.

The squad finds some canned goods, and when they're rifling through them, Peeta hands Katniss a can of lamb stew. Cue: feels overload.

Not that we have to remind you, but lamb stew is Katniss's favorite Capitol food throughout the books, and this triggers in Katniss a realization that Peeta must remember that. Because lamb stew isn't really a thing in the movies, it's highly unlikely this will be in the movie, but it's such an emotional moment of the books that I must mention it.

As they eat, Snow comes on the viewing screen to announce that Katniss and her squad are dead. The rebels interrupt the broadcast and Coin comes on to eulogize Katniss and rally the rebellion around her supposed death. It would be great to see this in the movie, since it would keep Coin and Snow in the story.

After the broadcast, they decide to move through the city underground. Peeta again wishes to be left behind or killed, insisting that it would be dangerous for him to be with them. When he eventually resigns himself to going with them, he refuses to have them uncuff him, and Katniss asks for the key. In the trailers, it appears that Peeta is still handcuffed when they go through the sewers, so it's very likely this will make it some form or another into the movie.

Castor explains that his brother Pollux worked underground for five years, and Peeta makes a comment about Pollux being their most valuable asset. Aside from him being completely right, Katniss also reflects on how she's seeing bits of the old Peeta in that comment. The movie will need to keep and maybe add in more moments like this to show Peeta's recovery, especially since Katniss won't be vocalizing these thoughts.

With Pollux's help, he leads them through the underground tunnels, and eventually they choose to rest. When Katniss is on watch, she notices Peeta is awake. After giving him a can of food to eat, she talks to him about him being able to tell which memories are real. She tells him to go to sleep, and she comfortingly touches Peeta's forehead. It's the first time she's touched him since his hijacking. This prompts Peeta to ask a "real or not real":


“You’re still trying to protect me. Real or not real,” he whispers. “Real,” I answer. It seems to require more explanation. “Because that’s what you and I do. Protect each other.”

Cue a million tears. Also, I'll be very surprised if this moment doesn't make it in the movie. It's a huge fan favorite.

Finally, the chapter ends with the scariest, most ominous moment possibly of the entire book. As she wakes the rest of the squad so they can get moving, she hears her name being hissed in the tunnels. It isn't clear from the trailers whether or not the lizard mutts will hiss Katniss's name, but it would make for a really creepy movie moment.