Promoting The Hunger Games at the Comikaze Expo! 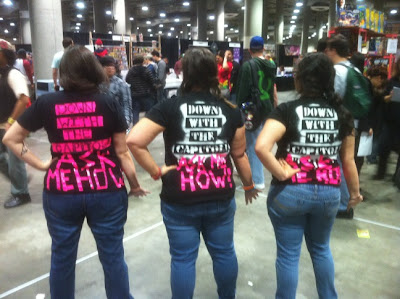 By Courtney and Tiffany

If you've ever been to one and happen to be a huge nerd, you know that conventions are like Christmas morning. Exciting panels, cool stuff to buy, free stuff, and opportunities abound to run up to a stranger dressed as one of your favorite characters to chat or take a picture with them. *Sigh.* It's the best.

With our tribute powers combined we saw the cast of All That, Stan Lee, Elvira, Ernest Borgnine, and the best of all, Luke Skywalker himself Mark Hamill. We also saw a fantastic amount of quality cosplayers.  People really brought their A-Game! We saw Cosplayers from all walks of life...except no one from The Hunger Games. Then again, there could have been, we just didn't see them. But rest assured that next year, especially after the release of the movie, we will see more Hunger Games cosplayers.

"The All That cast reunion was awesome. The cast members each did a few of their favorite and more well known characters (Kel Mitchell did Ed from Good Burger, Katrina Johnson did Ross Perot, for example), and they sang the All That theme song with everyone. They seemed to have genuinely enjoyed their time on the show, and they had an extraordinary amount of freedom for the age that they were when it came to being able to do their own characters.
We ended up attending the Womanthology panel without knowing anything about it. It's a graphic novel anthology created by women and the proceeds go to charity. Many of the stories presented to us seemed interesting and a lot of the art is just beautiful. We encourage everyone to check it out and you can preorder it on Amazon.
Sunday was very much a Steampunk day for us. We went to the Steampunk Fashion and Meet The League of S.T.E.A.M. panels. I've been casually interested in the Steampunk sub-genre (Victorian era science fiction) for a few years, and since Panic! at the Disco released their The Ballad of Mona Lisa video, I've been aware of The League of S.T.E.A.M. They had helped with styling and props and were extras for the video, and also came out to a concert in Los Angeles that I attended to do demonstrations with their functioning props. A few of the League of S.T.E.A.M. members have worked (currently or in the past) for such companies as Disney Imagineering and Jim Henson, so you know that they're legit. At their booth, we watched them demonstrate their working net gun, and if you wanted, they would shock you... LITERALLY." -- Tiffany

Taking to the Floor

So, my trusty Tributes (Tiffany and Denise) and I took to the show floor and promoted The Hunger Games. We sported our Mockingjay pins and "Down with the Capitol! Ask me how!" shirts armed with fancy informational cards promoting The Hunger Games books, TheCapitol.PN, Welcome to District 12, and The HG Fireside Chat. Unfortunately, not as many people approached us as I thought, but I handed out a few cards to people. I definitely learned a few things about promoting things at a convention.

"There wasn't really a Hunger Games presence within the booths. We only found one vendor selling Hunger Games items,  Foxwise. Her shop focuses on hand-stamped jewelry. She had other fandoms that I'm interested in, like Harry Potter and Doctor Who, but when I came across a bracelet that said "May the odds be ever in your favor", I was both surprised and really excited, so I bought it! I actually really love it and might be wearing it all the time, and I might just order other things from her in the future." - Tiffany

1.) Design something to give to people. Sure, they will most likely throw it away, but if it's interesting enough they will consider checking it out.
2.) Print out a butt load of them! The reason I didn't hand mine out to random people is that I procrastinated and every printer I used was low on black ink. Had I done this in advance, I would have printed out tons, and might have been able to reach more people.
3.) COSPLAY, COSPLAY. My biggest regret is that I didn't dress up as a Hunger Games character. If you have a great costume, chances are people will ask who you are, and WABAM!! segway into Hunger Games discussion and hand them what you are giving out. There's so many things happening on the floor, you need an attention getter.
4.) Catchphrase!! Sometimes shorter is better. You want to say something intriguing! One of our chosen catchphrases was "The Capitol is watching".

AMAZING!! We definitely recommend that you go next year. Considering this was their first year, it went very well. Comikaze not only is aiming to be as good as Comic Con, but to offer participants things that Comic Con doesn't. An example of this is THE PRICE. Their number one priority is to ALWAYS make their convention affordable. This will blow your mind: Thanks to Goldstar, we paid a whopping FOUR DOLLARS per day. FOUR DOLLARS, PEOPLE. Regular price was $12. Still, not bad at all! Not only that, but it mingles all the smaller artists booths together. There's no hierarchy of big name booths to smaller ones, everyone's mixed together! It gave a great floor experience.

"Comikaze as a whole seems to be the nerd community's answer to what has happened to Comic-Con. Their number one priority is keeping the Comikaze Expo as affordable as possible, and there seems to be an emphasis on those things that have been pushed aside for more mainstream interests at Comic-Con (comic books, manga, etc. being overshadowed by Hollywood hyped movies, for example). Since it was the expo's first year, things seemed a little unorganized and the panels being in "rooms" that were just curtained off areas on the showroom floor wasn't a good idea since it was quite often hard to hear (though it made for some amusing times when whole panels had to stop what they were doing while an announcement was being made over the loudspeakers). We're assuming they'll get the kinks worked out by the time next year's Expo comes around." --Tiffany

We hope to see you there next year!!!