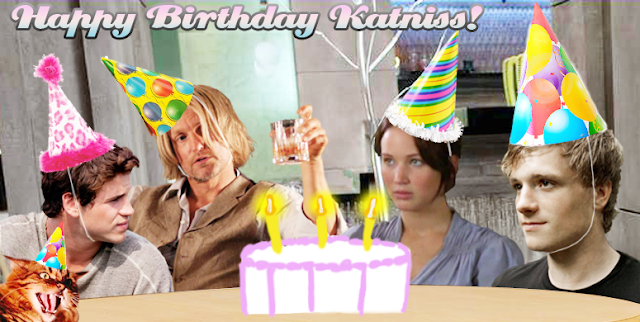 Happy May 8th! May we celebrate this fine day in honor of the future victor and symbol of the rebellion, Katniss Everdeen!

Last night, Fireside Chat hosts Adam Spunberg and Savanna New made us ponder how Katniss would have spent her day of birth, besides of course the oh so happy collecting of tesserae. Um.......woo hoo?

Anyway, I think it's safe to say she would spend the day hunting with Gale since that seems to be where she is happiest. But what about post-Mockingjay Katniss? Twitter-ites discussing the #HGFiresideChat last night came up with some rad ideas such as eat cheese buns all day, which sounds like a pretty sweet birthday to me.

But seriously, let's really take a second to appreciate the appearance of the most inspiring and all around awesomeness that is the newest heroine in town. When I finished reading the books, I had already put Katniss in the ranks with Wonder Woman, Princess Leia, Lara Croft, Buffy, and well,  you get the idea. In such a materialistic society, here is a character whose best skill is survival and supporting her family at age 16. She's a badass without any kind of thought that she is a badass. She can be a little socially awkward just like the rest of us, and despite setting up a million walls to protect herself, still maintains her human ability to love even in the romantic sense. But don't stop there!! I have admired Katniss for one MAJOR thing, I think to be the most important of all in the current young adult trends: Katniss needs no man. Notice how she doesn't end up with either Gale or Peeta until everything is over? That's because there are far more important things than having a boyfriend. Katniss' relationship or "love triangle"(if you would even call it that) is the B storyline in the trilogy, not the A. It takes a backseat until just about the last page in the book. So suck on that, Twilight.*

It is for these reasons today we are saluting the coolest and newest heroine in town, Katniss Everdeen! May she be remembered for generations to come!

What are you fans out there doing to celebrate?!