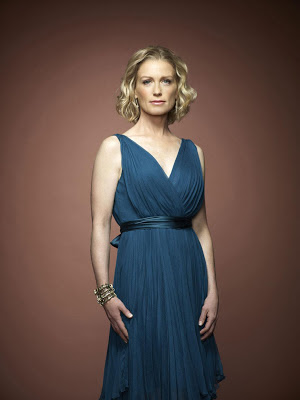 HAPPY 4TH OF JULY! We are celebrating with another edition of "Campaigning for Coin"! We're looking at Alma Coin hopefuls, and today we look at Jessica Tuck. As you read these posts, please comment on who your fan cast for Coin is!
*SPOILER ALERT!*
Welcome to District 12

Courtney/Tiffany: Jessica Tuck is in the correct age range for Coin, but this choice isn't one of those 'wow' choices we would like for such a big role. We know some fan sites really love her for Coin so we trust their judgement in acting ability, however she's doesn't have as much film experience as we would like. Her character on True Blood has many Coin qualities as well but we just don't think she's a big enough name for such a large role.

Savanna: Of all the potential Coins that we've discussed so far, Jessica Tuck is definitely my favorite! She comes very, very close to the fuzzy mental image of Coin that I developed while reading Mockingjay, and I think her look would really be perfect for the role. Tuck's character on True Blood, Nan Flanagan, is a vampire rights activist and figure of authority in the vampire community. Although she always appears calm and poised in her public appearances, she's quite ruthless and agenda-pushing behind the scenes. Remind you of anyone? While Flanagan and Coin are obviously very, very different, seeing how effectively Tuck portrays that "type" has convinced me that she would have no trouble bringing Coin to life and making her every bit as compelling as she is on the page. Unfortunately, I have a feeling that the powers that be will want to bring in an A-lister to play Coin, and Tuck -- while an absolutely gifted actress -- is simply not at that level.

Sheila: Jessica Tuck is one of my favorite fan casting choices to play President Coin. Best known to me as Nan Flanagan (the Vampire Spokesperson) in HBO's True Blood series, Jessica is easily able to play someone in a position of authority with a great deal of political power, while having an agenda behind her agenda. On screen she easily plays the part of the well spoken politician, but behind the scenes switches her persona to be one of the most ruthless vampires they have on the show. Jessica's character does what she does to get the job done and doesn't apologize for it. She believes in her power and her right to wield it. In my opinion, if Jessica's ability to play this type of character doesn't scream President Coin, I'm not sure what does.

Crystal: I admit, the news about Julianne Moore possibly being Coin depressed me. Jessica Tuck has been the Coin in my head for at least a couple of years now. If you're not sure who she is by name, she plays Nan Flanagan on True Blood and boy is she awesome at being curt, cold, and to-the-point. No matter who is cast for the part, if it's not Jessica Tuck, I'll probably keep seeing her as Coin. I'll probably even pretend it's her while watching the movies, that's how badly I want her to be Coin!

Arowana: Well Jessica Tuck definitely has THE AUTHORITY (Boom! True Blood joke straight off the bat) to play Alma Coin. As Nan Flanagan in True Blood, Tuck has already demonstrated that she has the stones to play a character that appears to be a fine upstanding leader of a segregated community, only to morph into someone quite unpleasant once the cameras turn off. The more I thought about this casting, the more I realised the parallels between Flanagan and Coin and the more I liked it. Flanagan isn’t afraid of a bit of collateral damage in her vision of the future, just like Coin, and in fact (Series 4 Spoiler Ahead) shortly before her decline, she too reveals a desire to overthrow the leadership status quo. Jessica Tuck performs this with spectacular ruthlessness and a steely authoritative stare. Keep in mind that Coin has brought her District through a survival-threatening disease outbreak already, and holds them tightly under a tattooed routine with heavy restrictions on all kinds of rations. She’s a scary lady with eyes the colour of “slush that you wish would melt away”, which I can see in Jessica Tuck. Of course, this might mean that Alma’s ulterior motives will be clearer sooner but let’s also remember that this woman played Sharpay and Ryan’s mother in High School Musical 2 and 3, and any woman who can withstand that girl can believably rule a nation.

Amanda: To be honest, this was a tough one for our entire staff. When discussing Katey Sagal as Coin, nearly each one of us said, "Peggy Bundy?" Granted, I know she's done other things - I loved her on "8 Simple Rules," was excited about her stint on "Lost," recognized her voice in Disney's "Smart House," and am aware the she received rave reviews (and award nominations) for her role on "Sons of Anarchy", though I've never seen the show. And though I adore her as an actress, the idea of her as Coin is completely out of left field and I'm just not sure I can get on board. Has she shown the range necessary for Coin through her TV roles? Can she overcome the character she is famous for from "Married with Children," even with the right hair and makeup? Can fans look past her very recognizable voice and see her as the plain, nondescript Coin? Too many questions that I don't have the answers too, so for me, Katey isn't quite a fit for the role.