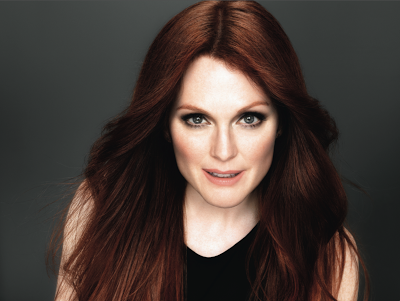 Yesterday, reports came out saying that Julianne Moore is currently in "early talks" to play President Alma Coin in both Mockingjay films. This came exclusively from Deadline:

As The Hunger Games moves into the final two movies culled from the Suzanne Collins novel Mockingjay, I’ve heard that Lionsgate and director Francis Lawrence are eyeing Julianne Mooreto play the role of President Alma Coin. She is the manipulative politician who figures brightly in the finale as Katniss Everdeen (Jennifer Lawrence) becomes a symbol of rebellion against the autocratic Capitol government. This is likely to happen quickly, and Moore would star in both of the final films, which brings back Josh Hutcherson and Liam Hemsworth and the returning cast along with Philip Seymour Hoffman, who will be making his first appearance in The Hunger Games: Catching Fire, which the studio is planning to bring to San Diego Comic-Con in July. Color Force’s Nina Jacobson is producing the series.

So far many entertainment outlets have been reporting this, even The Hollywood Reporter. It seems too good to be true, yet we have been fooled by reports such as these before. Remember the John C. Reilly incident? We don't trust anything until Lionsgate confirms, so in the meantime we'll be treating this as a RUMOR.

It's a coincidence this news came out yesterday seeing how we just recently posted the fansite-wide "Campaigning for Coin" on Julianne Moore. To see what fans have to say about Julianne Moore as Alma Coin, check out the post HERE!

Source: Deadline
Posted by Welcome to District 12! (Courtney) at 2:16 PM