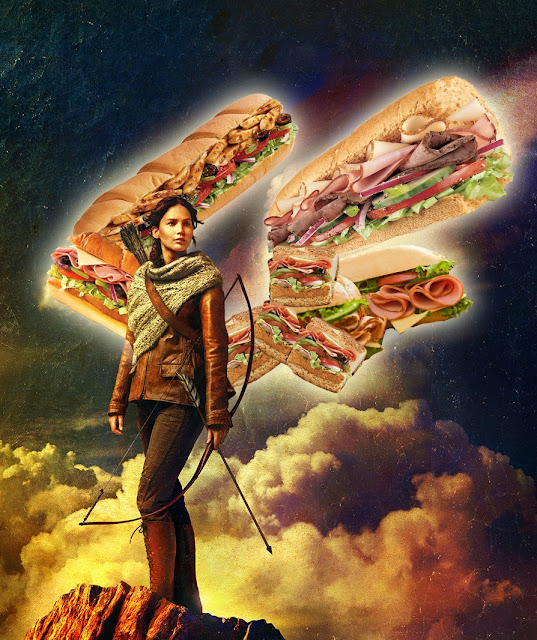 Today in Catching Fire news, Lionsgate has announced it's partnership with Subway. Looks like they will have a code giveaway game tied with the film, character stands in restaurants for fans to pose with, as well as supporting Feeding America. Check out the press release:

SUBWAY® restaurants in the U.S. and Canada will be fired up in anticipation of the film’s release, with a number of promotional assets planned for in-store, social, online, and broadcast. A special product line will be featured with thematic ties to the film, along with specially marked packaging with codes encouraging customers to engage online for their chance to win prizes. SUBWAY® customers can also pose with their favorite character’s standees in the restaurants and are invited to share photos on social media for additional chances to win.

“There’s nothing hotter than ‘The Hunger Games’ franchise,” said Michelle Cordial, Director of Marketing Development for SUBWAY® restaurants “Being able to deliver exclusive ‘Catching Fire’ experiences to our Subway fans is something that Hunger Games enthusiasts can’t find anywhere else.”

“With SUBWAY joining as a promotional partner for ‘The Hunger Games: Catching Fire,’ Lionsgate has found new ways to reach a larger audience of fans of the film franchise,” said Paula Kupfer, Vice President of Promotions and Consumer Products for Lionsgate. “Beyond providing fans with unique film experiences, what makes this promotion truly special to the studio is our ability to work with SUBWAY to support Feeding America and help provide to those in need.”