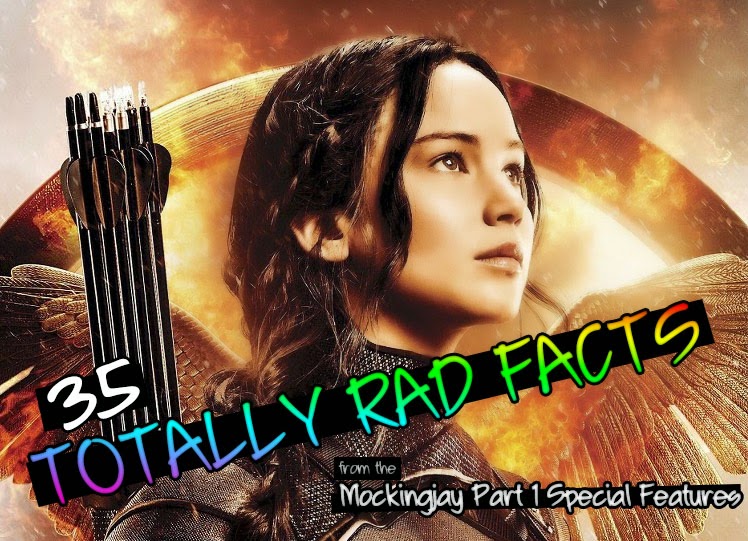 We hope you all are already enjoying your Mockingjay Part 1 Blu-Ray/DVDs today and whether you are enjoying it by yourself or with friends, we hope it's a RAD experience. The special features in particular are the best that's ever been released so we really want to encourage you guys to enjoy the Making Of documentary and/or the audio commentary from Francis and Nina.

If you don't plan on buying your own and you live in the US remember you guys can enter our giveaways on Instagram and/or our Blu-Ray review page.

Also, if you DO have the Blu-Ray and want to know how to access the easter egg, you can check that out HERE.

The Special Features on the Blu-Ray are VERY informative and for the lazy, but really because we felt like it, we've compiled a list of the most awesome tidbits of info we learned from watching the documentary and the audio commentary. Enjoy!

1. Julianne Moore read the books and sought out the role of Coin specifically.

3. Julianne Moore is a big reason why Coin will have such a drastic character arc in the films.

4. The machines in the control room and other places in District 13 are NASA inspired.

5. Sets for the most part are 100% real, only the extensions are blue screen.

6. Francis went out of the way to make sure the film did not look digital by using smoke, soft lighting, and old lenses.

7. The Bunker staircase is mostly real and pretty long. They built a whole structure to hold it outside the studio, and only the very bottom of it is green screen to extend the effect further.

8. The Bunker set had 100+ real beds installed to add depth to the bombing scene.

9. The Art Department grew 8,000-10,000 plants for the District 13 Hydroponics Department, which isn’t even in the final cut of the film.

10. Wes Chatham and Elden Henson created their own form of sign language, which can be seen in the background of certain scenes.

12. Kurt & Bart wanted to steer away from a superhero look and more of a soldier look for the Mockingjay outfit.

13. The Mockingjay outfit breastplate is actually an iridescent blue referencing a Mockingjay’s wings.

15. The Mockingjay outfit wings were modeled like armor and hold the quiver in place.

16. Cinna’s sketchbook is actually the Kurt & Bart's conceptual design for the Mockingjay outfit.

17. 80-90 prosthetic charred corpses were made for the District 12 scenes.

18. Extensive prosthetic makeup for all the extras in the District 8 hospital scene was such a large scale that it required an exorbitant amount of organization.

19. The Make-Up department worried about the rating of the film due to some prosthetic pieces being so gory.

20. The Hanging Tree scene was shot in an actual Quarry to reflect it taking place in District 12.

21. Half of the District 8 action sequence was shot in Atlanta, half in Germany. The shots inside the factory take place in Germany.

22. 28 giant loom machines were flown in from India for the District 8 factory scenes in Germany.

23. In order to achieve a realistic hovercraft physical effect, a craft was built and suspended by a crane with the actors inside. This part of the documentary is actually really fascinating and a little suspenseful. We HIGHLY recommend seeing it for yourself.

25. Jennifer’s take of The Hanging Tree on set is the actual version they used.

26. A quote from Alfred Hitchcock inspired Francis Lawrence to move the split to one with some sort of resolution.

27. The beginning of Mockingjay Part 1 originally started with Katniss’ walk through District 12 like the book

28. The research for District 13 came from past contained civilizations.

29. It was only 10 degrees in the first Hangar scene with Jennifer, Mahershala, and Liam.

30. There were 2 Buttercups: One that was good for holding and one for action such as the crazy cat scene.

33. The VFX team responsible for making Chris Evans skinny in Captain America is the same they used for Peeta and Johanna’s tortured looks.

34. Katniss intervening the broadcast to lure in President Snow was Suzanne Collins' idea.

35. Before the split moved, Katniss in the hospital with the neck brace was to be the first scene in Mockingjay Part 2.