We've got all the information you need to know about the Mockingjay Part 1 Blu-Ray right here, thanks to Lionsgate sending us a few copies as well as some to GIVEAWAY!!! Head down to the end of the post for giveaway details.

It's been a dry spell for us for sure since Mockingjay Part 1 in theaters flew away, and for me (Courtney specifically) I just haven't been in the Hunger Games spirit. I was so jazzed with how Mockingjay Part 1 came out, and I even had prepared to come out with our yearly score analysis (don't worry, it's coming!) and just never finished it. Such a bummer. However, everything has changed since we were able to enjoy the fruits of the Mockingjay Part 1 Blu-Ray. It is so jam-packed with behind-the-scenes, it catapulted me right back into Hunger Games Mania.

Easter egg, review, and giveaway details under the cut...

Every year, we have been able to find The Hunger Games Blu-Ray easter eggs (hidden content), and it's been something super nifty every time. If you have other THG Blu-Rays around feel free to check out our how-to for The Hunger Games and Catching Fire. Both times there have been obvious clues leading people to the easter egg, however there doesn't seem to be one on Mockingjay Part 1.

That doesn't mean that there isn't anything at all. It just means it's easier to get to. I had about five 1+ hour sessions looking for an actual easter egg. I've even checked the extra disc in the Target Edition. I have entered seemingly important color combinations and every single code ever seen in the Blu-Ray menus. The animation for the menus is pretty impressive, and even more so when I tell you the "secret". After the Lionsgate logo (my overall view count: 27) the logo turns into what will probably be the President Snow menu. It's like an intro to previews followed by 7 different previews, and then launching into the opening sequence of the District 13 control room into what is the full President Snow address on the main menu. Is this information important? Not really. But I spent many hours of my life living, understanding, and being this Blu-Ray, I want my suffering to be worth something.

SECRET! I'm not sure if this is correct, but according to my research you will get a completely different menu 1 in 5 times. There is around a 20% chance that you will get the District 13 themed menu, but who knows you could be like Janine and get it on the first go.

What's different? The Lionsgate logo turns into the District 13 control room instead of Snow's fancy shmancy office. After the previews, a different animation occurs as Beetee hacks into The Capitol (psst… they snuck in a Star Wars reference in the code) leading us into the main menu which is the entire District 8 propo. Which is totally sweet. I was hoping SO MUCH there was another puzzle hunt such as in past Blu-Rays, but alas I couldn't find one. It's possible this Blu-Ray release had a tighter turn around time or maybe they are just saving it for Part 2. If any of you actually find one, PLEASE LET US KNOW!

EASTER EGG: How a Revolution Dies

Thanks to QuarterQuell.org, who tipped us off to an Easter Egg clue in the pop up menu while the movie is playing!

So when you see Haymitch's stash: 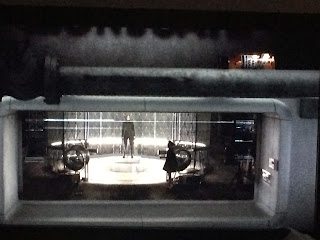 And how does a revolution die? Kinda like this, probably... 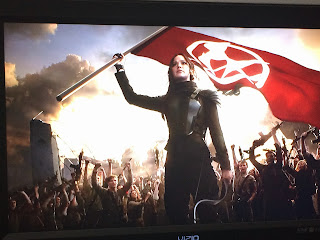 Let's get this out of the way now since it's important. Buy the Target version! Aside from the nice design of the case, it comes with an extra DVD with special features. The Best Buy Steelbook though also has a nice case.

Thank God Francis Lawrence believes in deleted scenes! There are some good ones in there, and although every year I wish for the raw footage deleted scenes, these completed ones are actually really satisfying. There are a couple book moments that are listed, one of them being my favorite -- the humming bird room. I did not think they would even shoot it, and there is a really nice score moment as well for this scene which I will go more into in our score analysis (coming soon!)

Tiffany: The behind the scenes featurette, much like the one for Catching Fire, is split into several segments that you can watch individually or as a whole. Being over 2 hours long, it may be a daunting task to watch it all in one sitting, especially if you’ve watched the movie beforehand, but the wealth of information and insight into the making of Mockingjay Part 1 is so worth it.

Courtney: As usual for the behind the scenes, we see a lot of Francis, Nina, and Jon Kilik talk about the franchise and the story. What was super interesting to me is that they discuss the importance of continuity. After the confusion of Gary Ross leaving, we made a plea to the internet about how important continuity is to us as a fandom. It just made me really thankful for how well this franchise has done over the years.

C: Nothing gets me more excited than art department stuff, so I was very enamored with this section. This is where my jaw dropping began and continued for the rest of the Making Of. The lengths they went to to make the effects practical is even more outrageous than the spinning Cornucopia. The District 13 bunker staircase? Totally real.

T: Like the previous behind the scenes featurettes, you’ll get glimpses of all the fun on set, revealing that, while the choking scene was very intense to watch in the movie, between takes the actors were having a grand old time. You’ll also catch a glimpse of the filming of the infamous pants scene that never made it into the finished movie.

T: One of the most fascinating sections was “Fusing Form and Function”, which was a look at the costumes, hair and makeup for the film. In this section, the costume designers Kurt and Bart went over the general District 13 look and the thought process behind figuring that out. But of course the masterpiece of the movie, the Mockingjay outfit, was discussed at length, revealing the different layers involved and the functionality of all the components. Along with that, the costume designers also provided sketches used for Cinna’s sketchbook. The section finishes with the massive challenge of that was the District 8 hospital scene, where many extras required makeup and prosthetics application with varying intensity.

Janine: Getting an up-close look on Katniss’ Mockingjay uniform and seeing just how practical it actually was in the field was super cool. I loved that Cinna’s sketchbook was actually the costume designers’ original sketches and notes for Katniss for the movie. One of the things I’ve always been curious about was how exactly Effie actually put her District 13 outfits together, so it was super cool to see the costume designers talk about that.

C: You learn some crazy things in this section about the District 8 action sequence. Half was shot in Atlanta and half was shot in Germany. The detail to make the textile district come alive was pretty staggering.

C: Definitely THE COOLEST section. Holy crapola, these stunts are outrageous and the lengths they went to to get a realistic hovercraft special effects is sort of suspenseful as Jennifer is just chilling in a craft suspended 100 feet in the air seemingly not holding on to ANYTHING.

T: This interesting segment was the challenge of filming the rescue scene in the Tribute Center, where stunt men and women repelled down the full 500ft height of the Mariott in Atlanta. Liam and Mahershala make an appearance here to repel about 100ft to make it more realistic looking for the scene.

T: In "Perfecting Panem", the post production section of the featurette, the cutters of the film go in depth on editing the film, revealing they were able to get the first cut of the film done in about four weeks. Everyone from recording the score to mixing the sound effects, creating the Mockingjay bird to appear lifelike to painting in CGI to fill in the practical sets are all discussed in this fairly large section, but it's all fascinating and worth a watch.

C: They really give the score aspect a nice amount of screentime in this documentary which I heavily appreciate. It's one of my top favorite aspects of film and when it comes to special features, you usually see about 15 seconds of actual scoring footage. In this Making Of, theres plenty of time discussing the importance of the score to the film.

Taking Back Our Future

C: The conclusion of the documentary is quite interesting Nina and Francis discuss the split between the movies and that it actually moved around. Yea, they almost ended it *THERE*. Thank you Alfred Hitchcock!

T: The behind the scenes featurette is a must for any fan of the movies and books.

J: The bonus features offered up this great wealth of information on the making of the movie and it was amazing. Each time I’ve seen Mockingjay, I’ve always noticed something new, so it was very interesting to see the people involved in the movie talk about making it. They discuss the process of thinking through which scenes and characters are omitted from the book, ones not from the book that they add to the movie and how and why it works. Then, talk about how the different elements - from the cast to the sets, costumes, hair and makeup, visual effects, music, everything - are conceptualized and then show how they come together to become this awesome, super cool looking movie.

C: I find the Yellow Flicker Beat music video to be strange since it doesn't really have anything to do with THG, but it is really interesting to see how Lorde went about curating the soundtrack.

I found out some crazy things listening to the commentary! There were 2 buttercups? If you want some fun facts, take a listen! Also, apparently a booper reel exists! I hope that's the easter egg on the Part 2 Blu-Ray….

The extra disc with the Target version is more or less the Making Of documentary plus a little extra. There's extra info on the costumes, makeup, set design, and stunts so definitely check it out if that interests you!

ATMOS! -- Until this release, you could only enjoy Atmos in theatres (IMAX for your ears!! Speakers everywhere, even the ceiling!) but now on the Mockingjay Part 1 Blu-Ray your speaker setup will live up to its potential. Home Theatre ATMOS! The future is now, people.

*Check out our INSTAGRAM to enter to win the Steelbook!

a Rafflecopter giveaway US residents only. Must respond to winner email within 48 hours or will pick a new winner.
Posted by Tiffany at 10:00 AM