Kurt and Bart Go In Depth With Cinna's Sketchbook

We've loved the scene where Katniss receives Cinna's sketchbook since we read Mockingjay, and seeing it in the movie dazzled us. In an article with Time, costume designers for the film Kurt and Bart go in depth with the sketches they contributed to make Cinna's sketchbook a reality.

Revolutions often come with a uniform, from the pantalons of the French sans-culottes to Che Guevara’s military fatigues. So when Katniss Everdeen joins the uprising in The Hunger Games: Mockingjay—Part 1, she has to dress the part.

Mockingjay is already on digital HD and comes out on DVD/Blu-ray on Friday, and to mark the occasion, the movie’s costume directors have shared their drawings of Katniss’s battle outfit (six of which are being released here for the first time). Design team Kurt and Bart say they took inspiration from the armor collection at New York’s Metropolitan Museum of Art, as well as historical depictions of Joan of Arc. The result is this sketchbook, depicted in the film as belonging to Katniss’s stylist, Cinna.

The designers say creating the outfit through that character’s eyes was a helpful approach to the process. “He knew [Katniss] was to become not only an actual on-the-ground leader of a rebellion,” says Kurt, “but also the symbol of the revolution. Symbol and soldier was our mantra.” 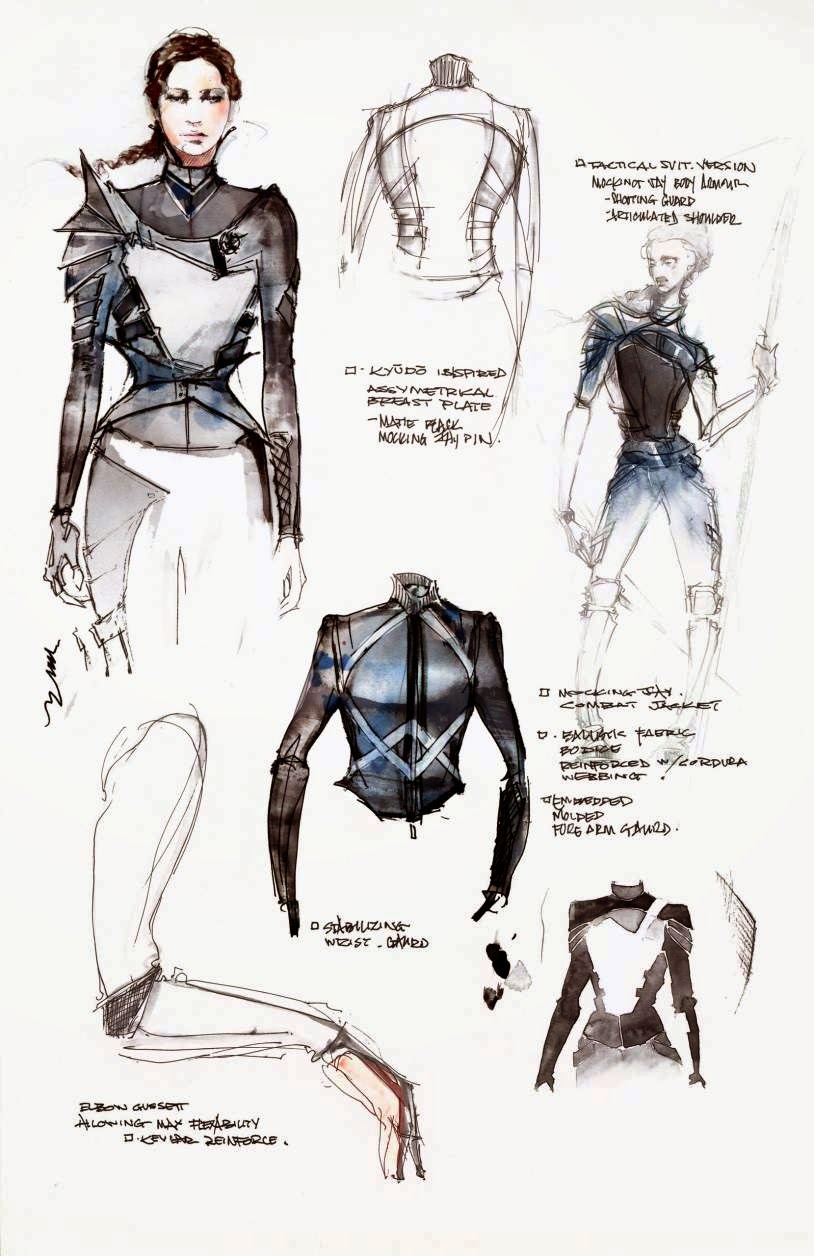 Kurt: In this drawing you can see one of the earlier versions of the shoulder armor which was a bit more stylized. The asymmetrical breast plate was informed by the gear worn in the Japanese martial art of archery Kyudo. We gave all of these hard armored parts a very subtle sheen of iridescent blue back which referenced the Mockingjay bird. The jacket itself was built almost like a corset with a woven maze of nylon webbing at the waist that when zipped gave Jen an even smaller waist.

More under the cut! 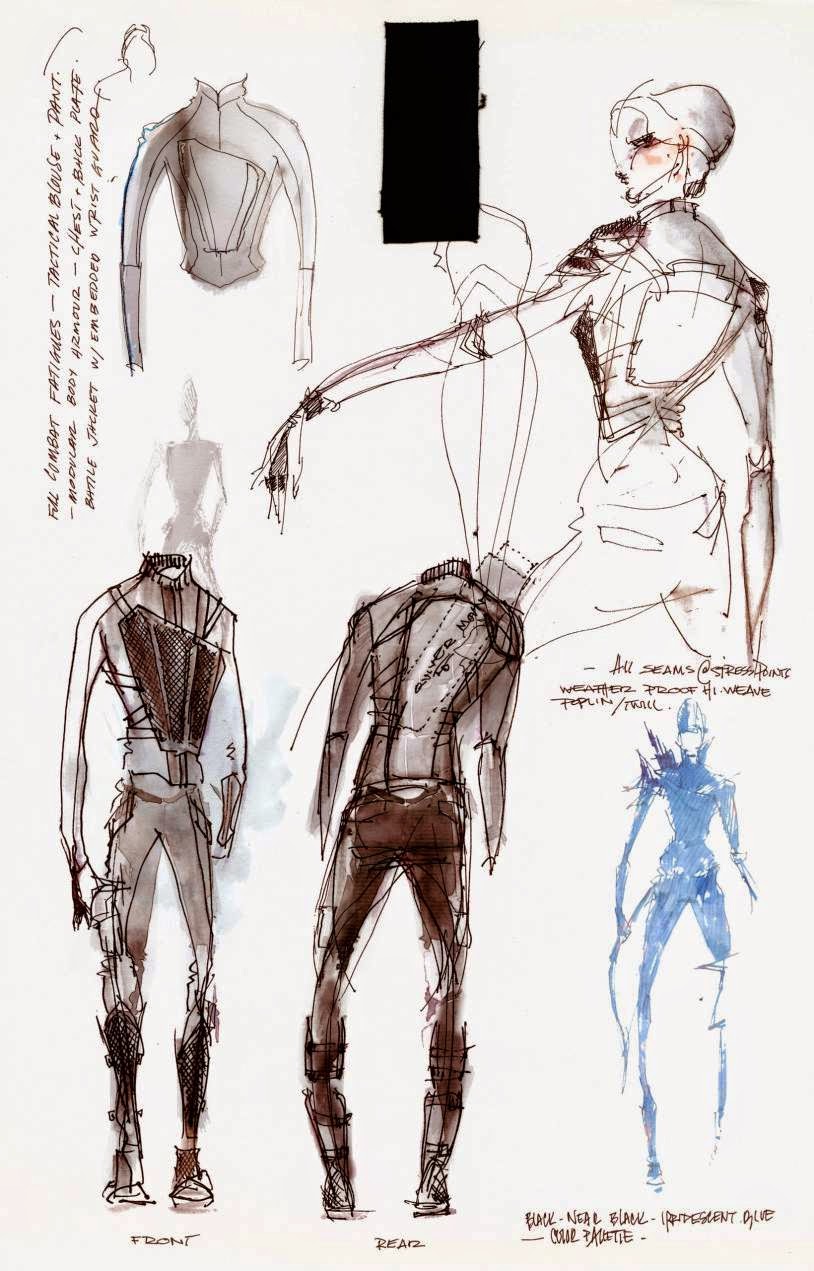 Bart: The costume was built to be modular and at its base was a set of tactical combat fatigues featuring a jacket and pants. We designed this fatigue for maximum functionality. This sketch shows that base fatigues that are similar to the lean silhouette of the rest of our D13 soldiers in the film, but there are very considered design details specific to Katniss and her weapon of choice the bow and arrow. 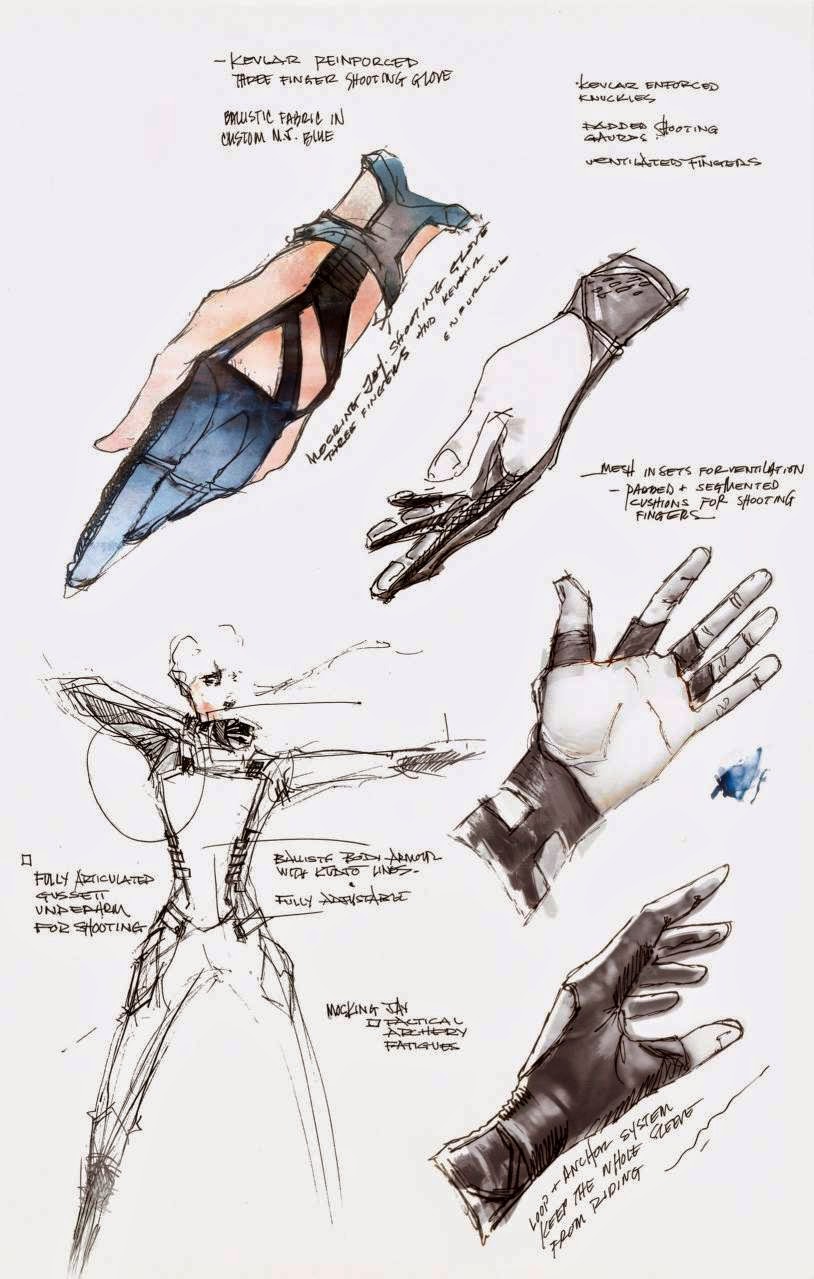 Kurt: This drawing shows several studies of what would become her three finger shooting glove that was attached at the wrist and featured ballistic materials also found in the protective gear in the costume. 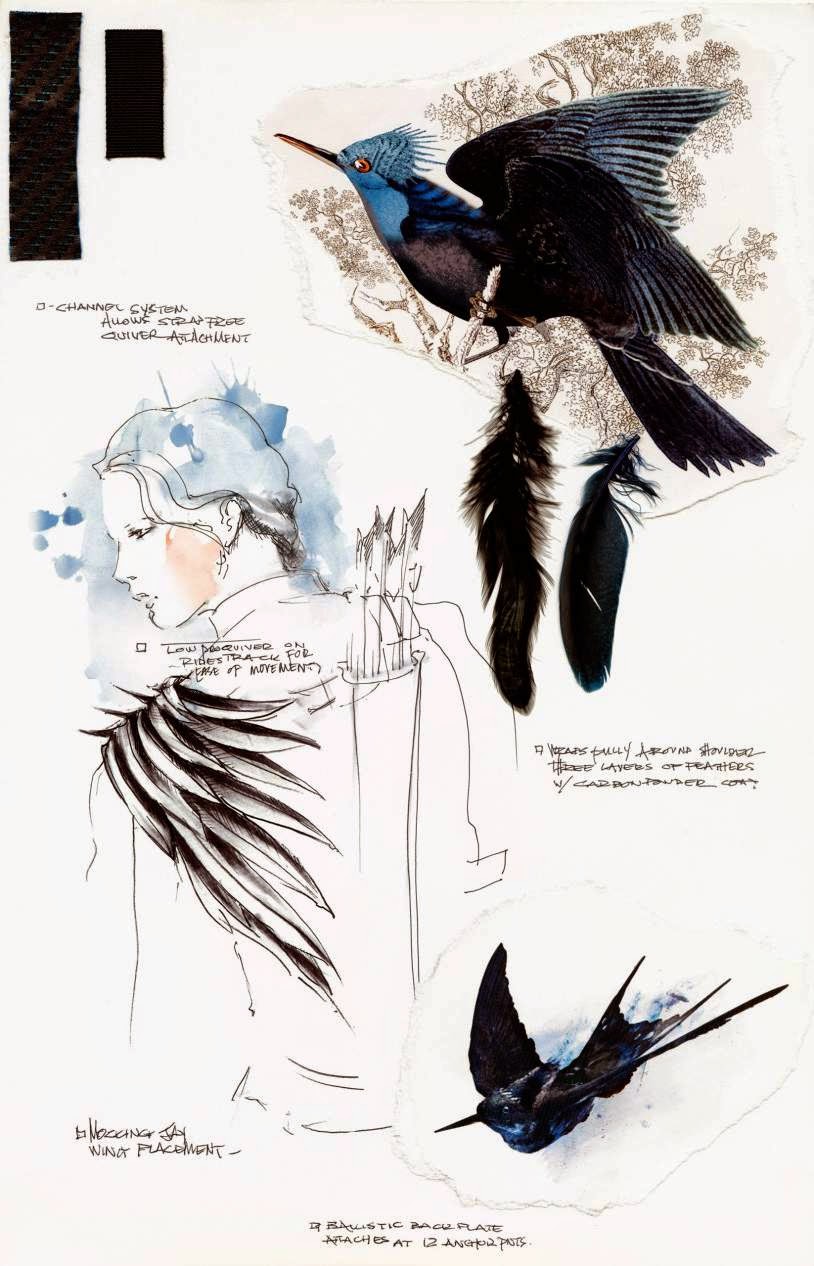 Bart: This drawing shows the way we shaped the wings to be close to the body which was nice because from the front you could just see the beginnings of that arc and how that pulled to the back. We had to also arrange the style lines of the feathers so that the sculpture didn’t get in the way of the quiver which had to occupy the same space. The quiver was ingeniously rigged to a channel that slid into a mount at the center of the back plate, thus making a shoulder strap obsolete. This page also shows how Cinna might paste together images that inform his process, images of the Mockingjay, an actual feather and strips of fabrics. Our Production Designer Phil Messina did a beautiful job making this into a really beautiful art prop for the film. 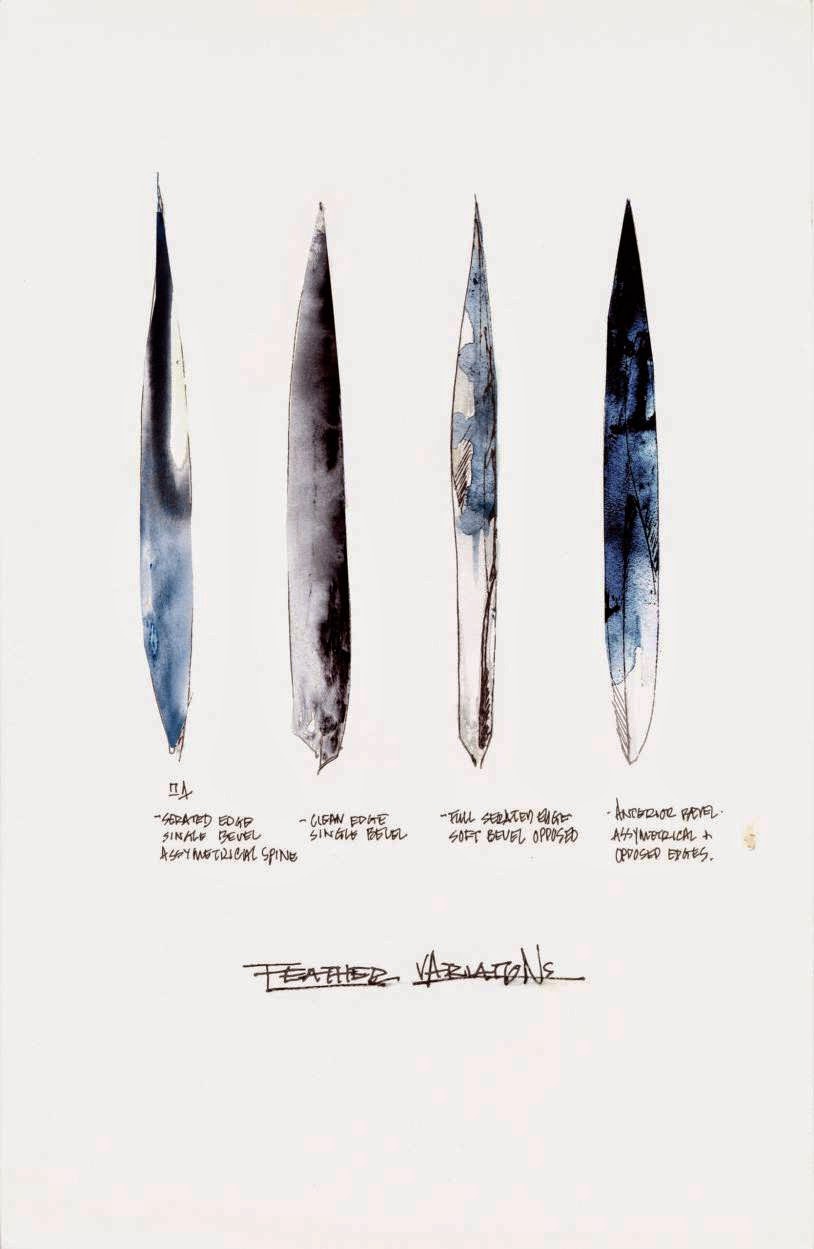 Kurt: Creating the wings we looked at and drew so many different kinds of feathers. We settled on a sculptural stylized version and this sketch shows a study in variations on the amount of beveling and possible finishes. There is a knifelike quality to the final feathers designed to catch the light in a very beautiful way without feel in too menacing. 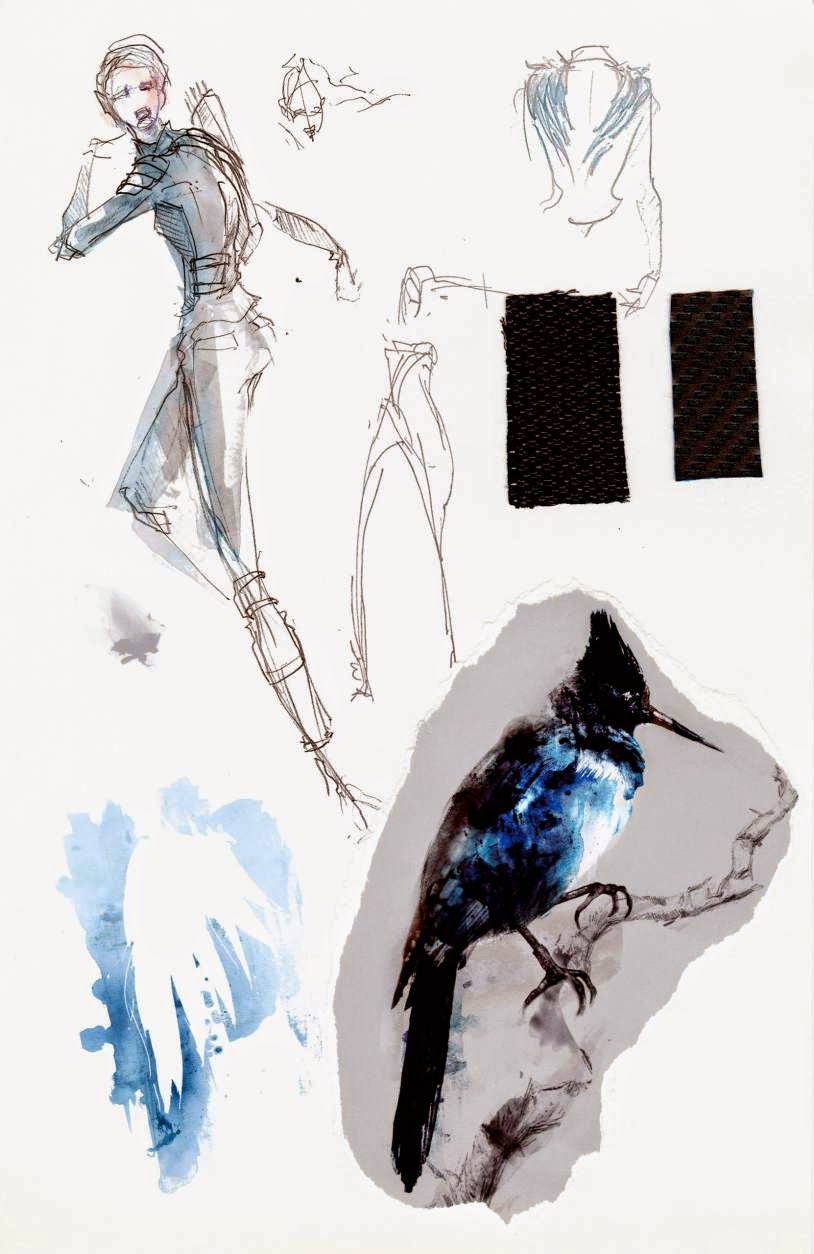 Bart: This is another quick sketch page working out the silhouette as well as how an artist like Cinna would use his sketchbook almost like a mood board, utilizing bits and pieces of different inspirations. 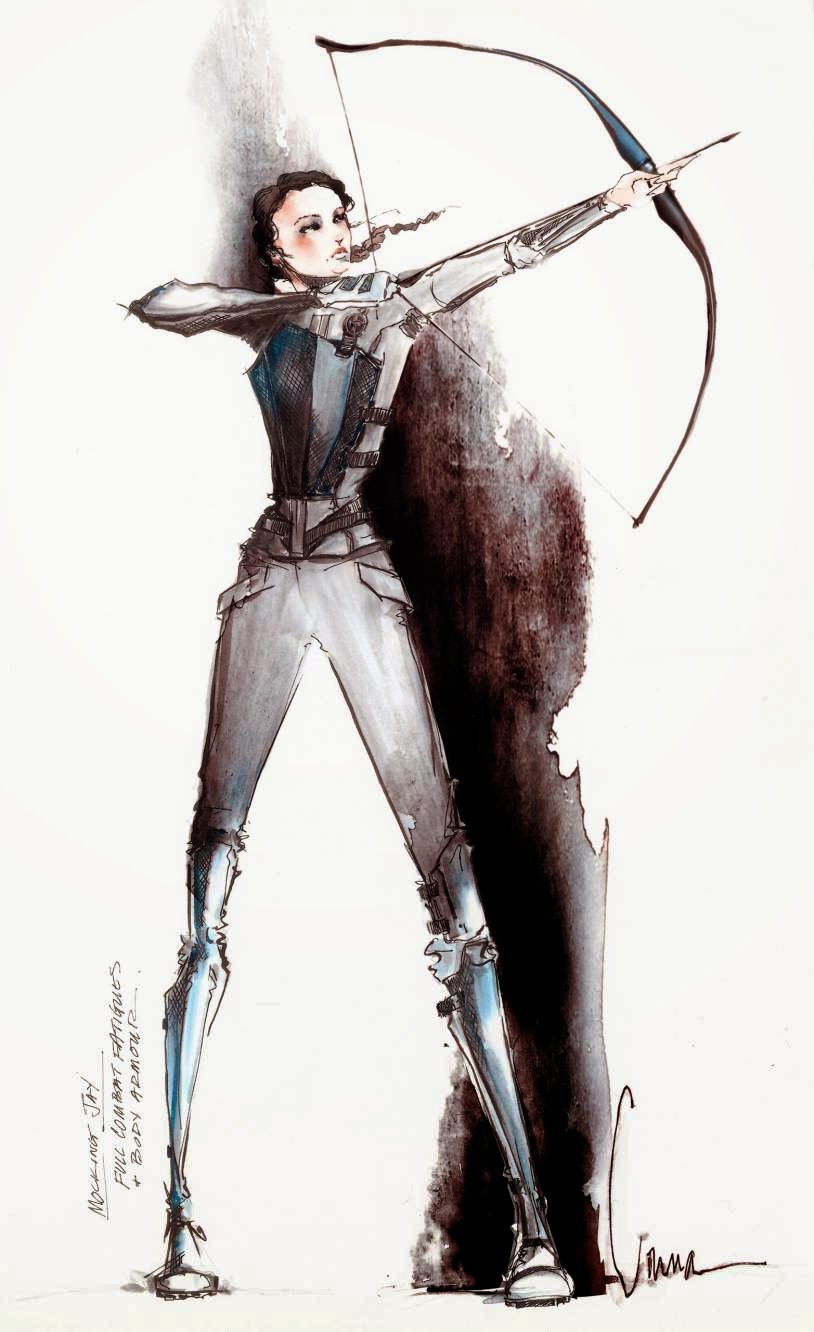 Bart: This is the fashion version of the Mockingjay. I swear that I have shortened the legs three times on this drawing and I know they are still ridiculous. 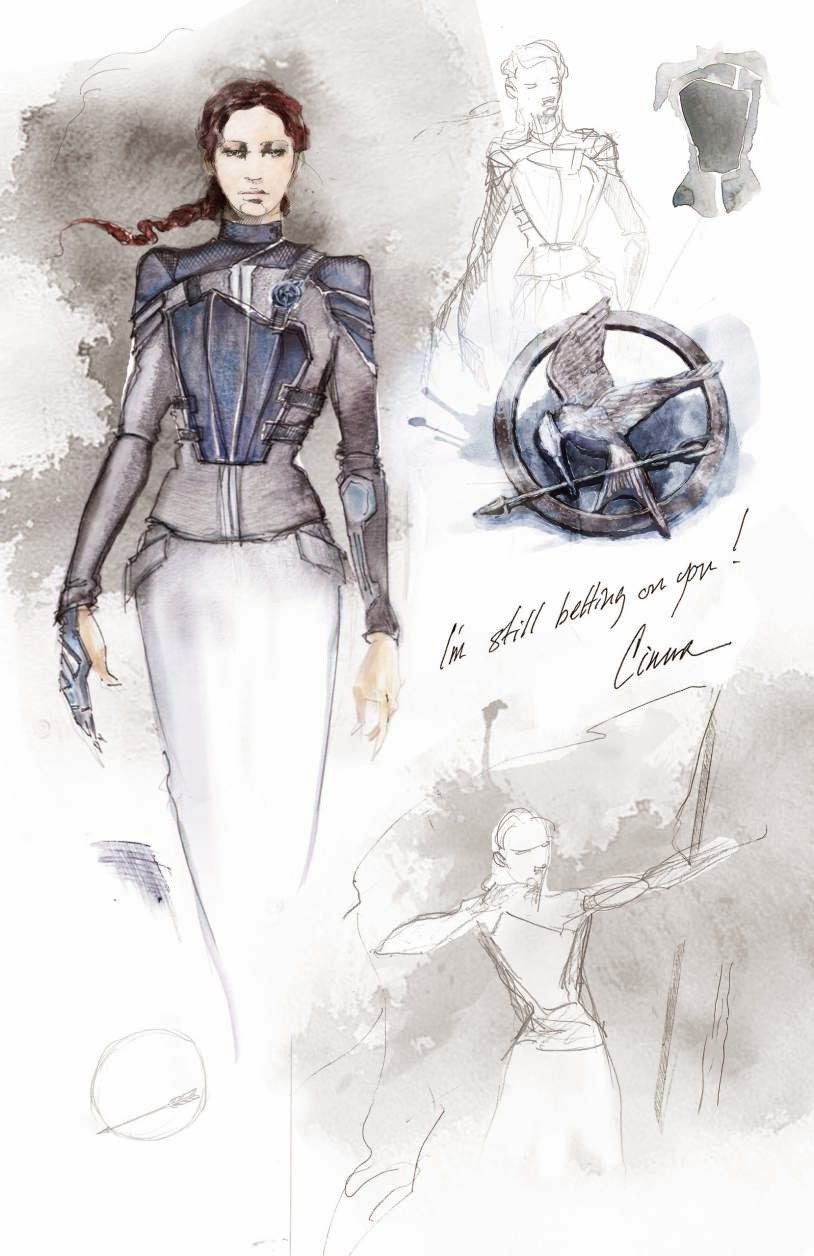 Kurt: This drawing features the revamp of the Mockingjay pin in a black powder coat to match the armor. Our fantastic prop designer Drew Petrotta came up with the black design which really was the final piece of the puzzle.

It's evident that Kurt and Bart really thought about the Mockingjay outfit, both in regard to form and function. They seemed to truly put themselves in Cinna's shoes when creating this iconic piece, and it definitely shows!
Posted by Tiffany at 1:52 PM