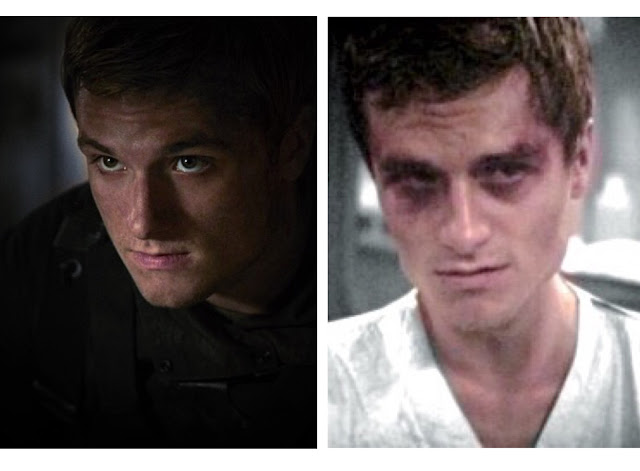 GOLLUM GOLLUM...*ahem* I mean PEETA. Poor Peeta is so confused by his memories he's started arguing with himself like Smeagol from Lord Of The Rings.

Chapter 17 opens up to Katniss finding out that according to District 13, her part in the fight against The Capitol is over. She is furious that she will not be able to join Gale and the other soldiers in the fight on the front lines. In order to be able to join the soldiers, Katniss is given the opportunity to join them in training to get into fighting form in time to attack. Katniss gets Johanna to join her in training so they will both be able to go.

I don't necessarily think that this will make it in the movie as more than a tiny part but if the movies were a little more silly this would be a perfect place for a montage. Katniss and Johanna working out. Johanna freaking out over the rain. Throwing up their stew whilst doing jumping jacks. You know, normal training footage, showing us a passage of time. Lots of things happening at once, reminding everyone of what's going on, with every shot show a little improvement because to show it all would take too long. THAT'S CALLED A MONTAAAAGE. EVEN ROCKY HAD A MONTAGE. And of course you gotta fade out in a montage.

At some point during this training montage, Johanna and Katniss have decided to bunk together. They go to get dinner with their friends and low and behold who shows up but crazy himself, Peeta. He proceeds to make some off color remarks about Annie and Katniss and Katniss decides to leave. Johanna later tells her that when she left Peeta starts to argue with himself as if he was two people. They quiz each other on military tactics and as they go to sleep, Katniss gathers the courage to ask Johanna about being tortured in The Capitol with Peeta. Johanna confirms that they were very familiar with each other's screams. Neither girl has a peaceful night.

I really hope that this conversation between Johanna and Katniss happens. We get a glimpse of what was done to Peeta and Johanna and we see how truly broken Peeta's memory is.