As you may have heard, the totally awesome Victor's Village is hosting a Buttercup contest. Most likely the best idea ever. I thought this might be the only opportune time where I can legitimately post about my own Buttercup: Raindrop.

I got Raindrop in 1998, given to me by my parents from the next door neighbor's of my then best friend. I would find out later that Raindrop was raised in a not so loving situation. His mom, brothers and sisters were held in a confined area, only to be tormented by loud barking dogs quite closely to their living space. Raindrop wasn't very well taken care of either, since he had a few health problems that needed to be dealt with when he came into our home. My parents lovingly dubbed him "Dumpster Kitty".

We named him Raindrop due to his white markings on his face, and well, I don't know if you'd call him a people cat. When he was a kitten he would sit on my mom's lap despite all the pins and needles sticking out of the quilt she'd been working on. This eventually stopped when he got older. For the most part he would prowl around the house, doing as he pleased. He's incredibly independent as you can leave him for days on end (granted you leave him enough food and water) and he'll be just fine when you return. He does not seek yours, mine, or anyone else's favor. My aunt calls him "The Cougar".

It was the first day of Summer (I believe it was around junior high) and I was watching morning cartoons sitting on the couch. Lo and behold Raindrop jumped on the couch and curled up in my lap. This was huge! He stayed there for about five minutes and then got up and hopped off the couch. Little did I know that would be the first and only time Raindrop sat in my lap entirely of his own accord.

Nowadays, Raindrop allows me to pet him much more. Maybe it's his old age, I don't know. I've spent 13 years trying to figure this cat out, trying to find a chink in his armor that will allow me to hold him or have him in my lap more than half a minute. No such luck. At least he has improved his people skills. He'll let you pet him. Go ahead, I encourage it! He does enjoy it. But pet at your own risk because one minute he'll be happy as a clam and next minute your fingers are in his jaws. 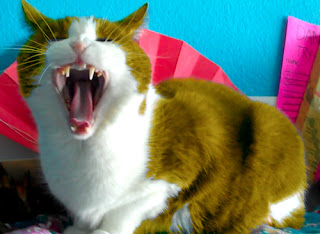 Reading the Hunger Games makes me think that if we were living in Panem, Raindrop would no doubt have to be an outdoor cat. If I lived in District 12, I'd put money on if Buttercup and Raindrop were to meet face to face they would either A. engage in a fight to the death or B. get along extremely well and become hunting buddies.

So onto the task at hand: The Buttercup Contest. I really feel Raindrop is a true contender. He certainly channels Buttercup most of the time, and I feel the only time Raindrop shows even some kind of affection for me it's during feeding time. "This is the closest we will ever come to love".

So please, dear readers, I ask you to vote for Raindrop. Or as I like to call him, "Butterdrop". 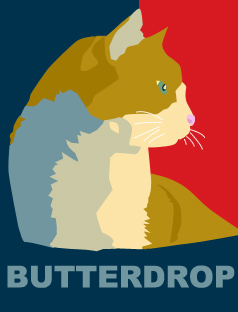