Panem October Vs. The Capitol.PN


Panem October
About 6 months after becoming part of the Hunger Games fan online community, I got this mysterious message:

Thus began a frenzy to find out what district you were in. What did it mean? Would we be reaped? Soon after we were all signed up, more people found out via source page another site: welcometopanem.com. In May, we could go to a Mellark Bakery site and order bread. Curiosity buzzed around the fan community, and more and more people every day signed up for tesserae, all wondering what might hold for us in October. Meanwhile on Tumblr, people by the hundreds started following our blog simply for the name. 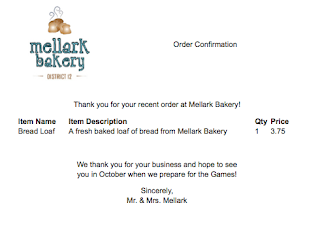 I started F****YeahDistrict12 as only a Hunger Games blog, but oddly enough those who got put in District 12 on Panem October started reporting for duty. Having all these followers land in my lap, I started fighting back, rallying other people to stand up against those known as "GamemakersAnon". This sparked a war of rallying on our side, secret poems and threatening message on their side. It was a thrilling, mysterious experience.

Oh, how the Gamemakers have changed. Or have they? Just because they aren't leaving us threatening messages, doesn't mean they've given up on us. They are still watching us. Still, we find @panemgovernment leaving us threatening tweets (as that's where I spend most of my time nowadays. Rowan has even "graced" us with his presence on the HG Fireside Chat (which is on tonight, don't miss it!). Panem October is reaching more and more Hunger Games fans every day.

Finally, October is here and we have gotten the first glimpse of the Panem October experience. It's very impressive for a fan-made ARG. There's still so much left of it uncover, yet there's a great deal you can do: friend each other, leave a Panem-oriented Facebook-like status, Panem Radio, and keep racking up scans of your Panem ID to reveal your district's website. Even with all this, there are still new features to be readily available and more parts of the website to uncover. Panem October is setting an extremely high bar.

When the first official Hunger Games teaser trailer came to a close, you could hear a haunting four note whistle that could only belong to Rue. In the bottom corner of the screen: #WhatsMyDistrict.

Soon after we were all directed to TheCapitol.PN, which was a whole bunch of mechanical noises and static. Little by little, day by day, the image became clearer. When the site opened, "WOW are those graphics cool!" I for one, was also extremely pleased by the official Hunger Games ARG URL. For those who don't know, other countries URLs end differently: .UK, .JP, etc. The fact that this one ends in .PN is GENIUS. GENIUS!

Still, this whole thing is mysterious. Now many of us are trying to expedite our DIPs for our districts. Why? Uh, why not? I don't know about you, but I want to see what the official Hunger Games ARG has to offer. They've also enlisted one lucky twitter member per district to be a District Recruiter. My good twitter friend @JeamieMarie got chosen for District 7 recruiter, and thanks to her efforts, they've already achieved their DIPs (Come on, District 4 get a move on!).

I guess we will just have to wait and see what exactly they have to offer.

PO or PN?
The fact that Lionsgate allowed these two to exist is a godsend. It really showed me that they actually do care about what fans want. I love that not only is Panem October allowed to flourish, but Lionsgate is making efforts to keep their ARG up to par. If not for PanemOctober launching, would TheCapitol.PN have started assigning recruiters as soon as they did? I'm not too sure, but it really seems that because Panem October exists, TheCapitol.PN is stepping up their game.

Verdict?
BOTH! These ARGs are creating more buzz for the Hunger Games, both the movie and the books. Clearly, PO and PN can live in harmony and both have the potential to offer great fan experiences. I say two is better than one.

Wait, there's more!
In case you haven't heard, the BEST Hunger Games podcast around airs tonight at 10 EST/7 PST. Tonight's topic: "Battle of the ARGs"
Make sure you guys listen to this one, as there will be discussion about both of these ARGs, along with some other great discussion topics. Also, live-tweet along with us and many other Hunger Games fans using the hashtag: #HGFiresideChat