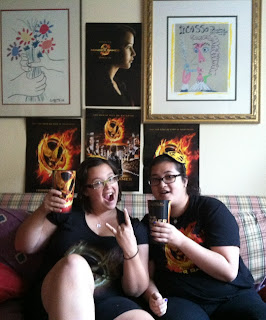 Well, the Welcome To District 12 twitter party was a fun time for all, and we thank everyone for the retweets! Beer and brisket was had, and oh one little thing...

Since it was such a big press event, naturally we have some cool things to show you!

First off, here is the hilarious short that Jennifer Lawrence appeared in with one of our favorite comedians, Joel McHale:

Next up, turns out Josh had some cool things to say about meeting with Francis Lawrence:


"I sat down with him a couple of days ago," Hutcherson told me at the MTV Movie Awards. "He's fantastic. He's such a smart guy. He has some great ideas for the movie.
"I just really like where his head is at," he continued. "I really like him a lot."
Most of their chat focused on Peeta.
"We talked about character development in the stories," Hutcherson said. "As you know, the second book is more complicated than the first, so we talked about the narrative. Everything he said was super smart."

Here are some random pictures from our twitter party: