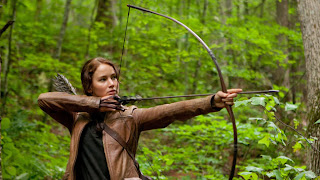 WOOHOO! Catching Fire will be an IMAX release, and even better: some scenes will be shot in IMAX!


Imax is to release Lionsgate’s The Hunger Games: Catching Fire on its super-sized screens on November 22, 2013.

Imax had success releasing the first Hunger Games film, with a rollout in China on 67 of its giant screens to come later this month. For the second installment of the movie franchise, director Francis Lawrence will use Imax cameras to shoot certain scenes from The Hunger Games: Catching Fire, which will also be digitally remastered into the Imax format.
"We are thrilled to continue the productive partnership we enjoyed with Imax on the first installment of The Hunger Games," Lionsgate motion picture group co-chairs Rob Friedman and Patrick Wachsberger said Wednesday.
The Imax rollout of The Hunger Games: Catching Fire will take place day-and-date with Lionsgate's wide release on November 22, 2013.

Well how about that, Universal CityWalk IMAX? Now you HAVE to schedule Catching Fire into your IMAX lineup!!