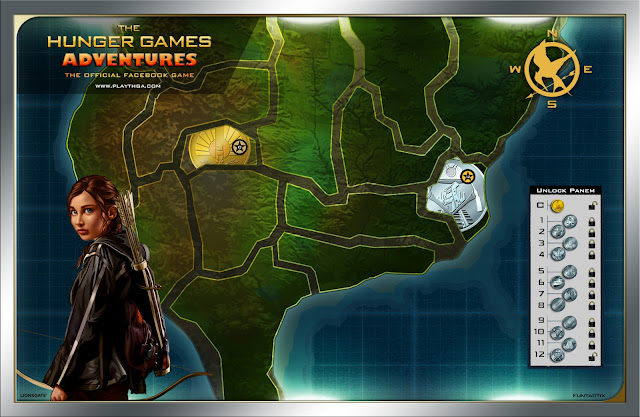 Finally! The official map of Panem has been released as we posted earlier (there's actually more districts revealed in that post), but here's a press release of this awesome news. Here's the catch....you have to play The Hunger Games Adventures on Facebook to see for yourselves where the rest of the districts go!

Funtactix, a worldwide developer and publisher of social games based on the world’s premier box office films, in partnership with Lionsgate, yesterday revealed an exciting new addition to The Hunger Games Adventures, one of the hottest social games on the Facebook platform. This landmark release offers an exclusive look at a new map of Panem. The map is one of the most anticipated updates to the game and arrives as part of a series of new content reveals leading up to the DVD release of the film on August 18.

For the first time, Hunger Games fans can use the new map of Panem as they explore the world of the film and novel, complete quests for their favorite heroes and unlock all-new stories inside the world they love. Thus far, the epic adventures of the game have led fans to the Capitol, District 12, District 11 and, most recently, District 2. In the coming months, new districts will be revealed exclusively through the new map, along with an exciting storyline that will take players on a journey from obscure citizen of District 12 to a hero capable of unlocking Panem’s deepest secrets.

Since launch, Funtactix and Lionsgate have continued to work together to provide the game’s audience with a steady flow of fresh, dynamic content, using Facebook to continue the story of The Hunger Games universe in between film releases. With over a million players and growing, fans continue to devour assets and game play almost as soon as the weekly chapter updates go live.

For more information on the game, please visit The Hunger Games Adventures Facebook page at: https://www.facebook.com/TheHungerGamesAdventures
To download and view a screenshot of the map along with new screenshots of the game, please go to:
http://bhimpact.gamespress.com/product_page.asp?i=1269

When the games end, the adventure begins!

Panem needs you!  Embark on a daring adventure beyond the fence of District 12 accompanied by your most trusted Facebook friends and your favorite characters from The Hunger Games. Explore Suzanne Collins’ epic universe alongside Katniss, Peeta, Gale and the other characters of the novels and film. Hunt and trap in the wilderness outside the fence, then bring it back to trade in The Hob. Visit Peeta’s Bakery, The Seam, the Justice Building and then escape from it all to a secret forest hideout that is exclusively yours. Escape from District 12 and explore Panem, meeting Cinna, Effie, Seneca, Thresh, Rue and a host of other characters. Join the rest of the fans and your Facebook friends as new adventures, districts and the official map of Panem are unveiled inside the game.