Our interview with Jack Quaid and Dayo Okeniyi at the Midnight Release Party! 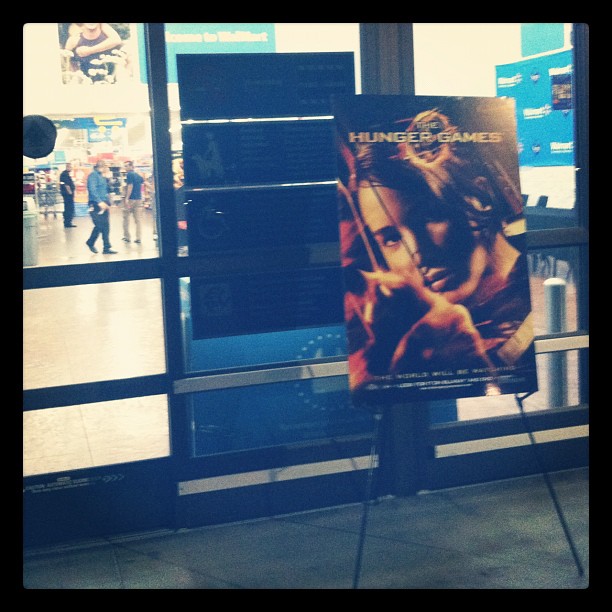 Last Friday night we attended the Santa Clarita Walmart Hunger Games DVD release party! While many fans lined up outside of the Walmart answering trivia questions and eating cupcakes, we (Courtney and Tiffany) got a spectacular opportunity to have a group fansite interview with Jack Quaid (Marvel) and Dayo Okeniyi (Thresh). We hung out with the lovely Erin and Elena from TheHungerGamesMovies.net, Beth from Mockingjay.net, and the ever awesome Aldrin from Down With The Capitol. 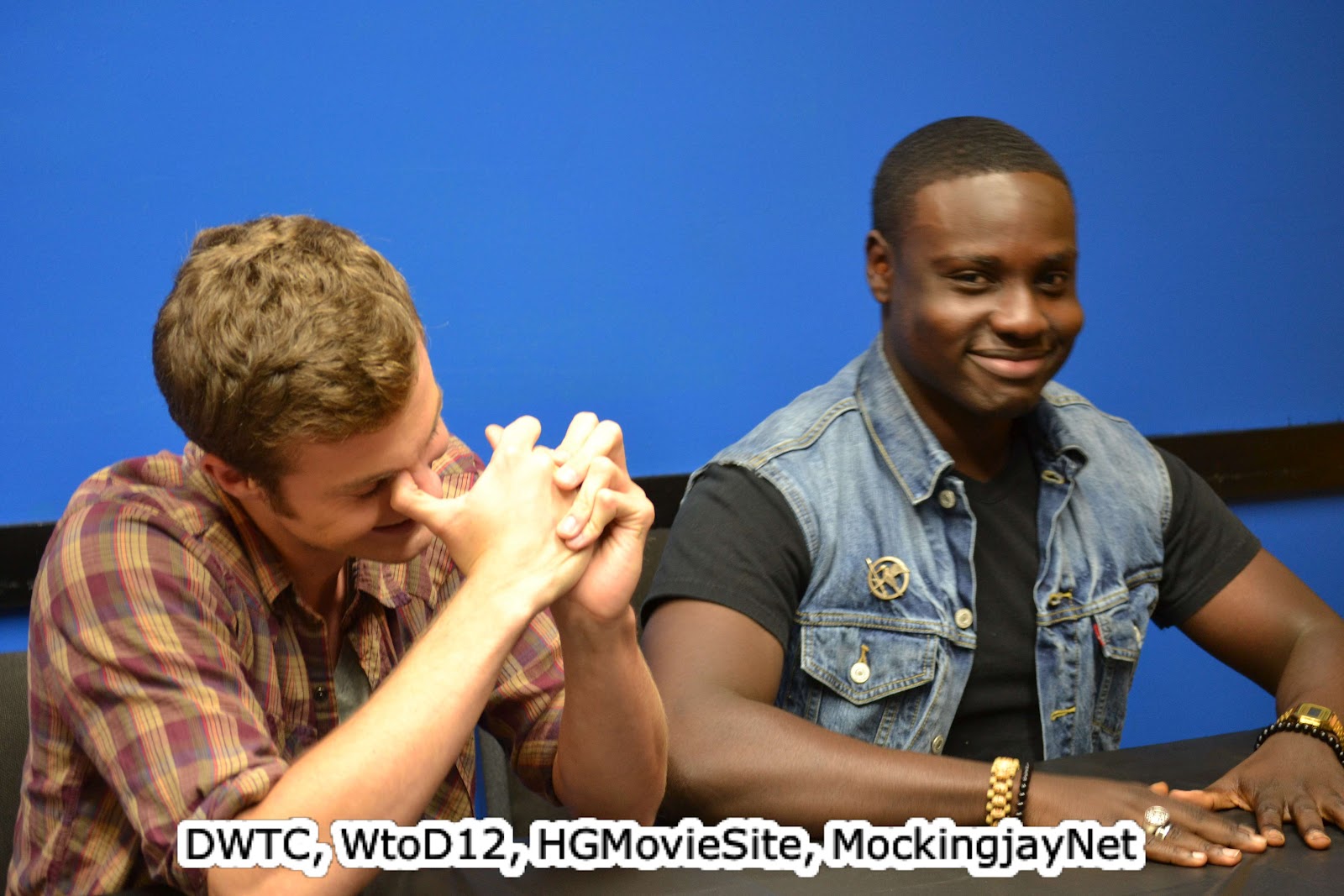 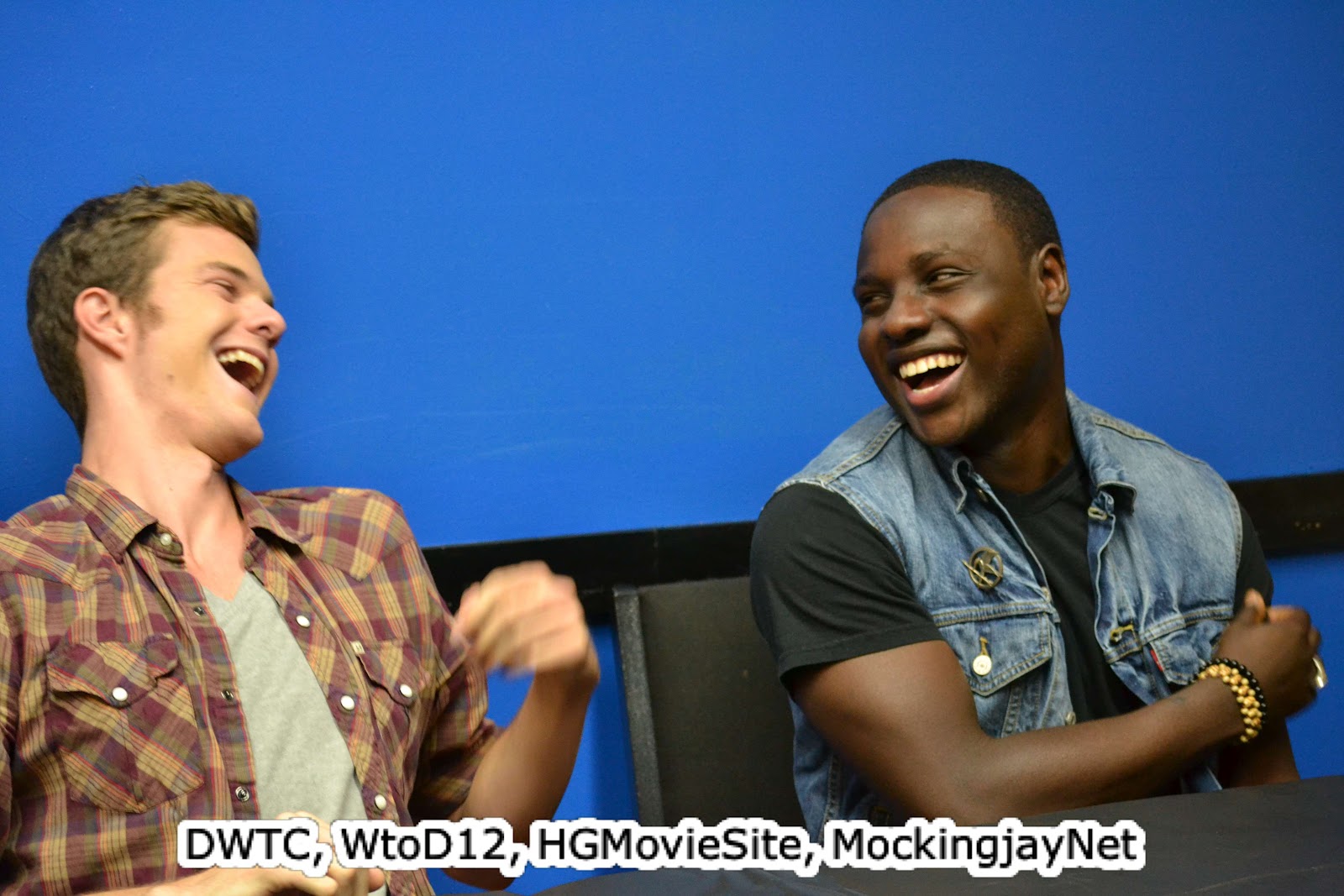 You guys will definitely want to see Aldrin's Vlog of the night's events, especially our interview with Jack and Dayo. Although we have provided an audio recording and transcription for you guys, you have to see it to believe it. Hilarious conversations were had!

Jack: Really though?
Dayo: On sandwiches?
Jack: I’m a huge fan of sandwiches. I had a sandwich today in fact. Which is insane.
Dayo: I think they are awesome. Not when you’re not allowed to eat carbs. We weren’t allowed to eat carbs. You see how I am trying to make this about the movie .
Courtney: Yes.
Jack: There is actually a story I have always wanted to tell.
Dayo: About the bread?
Jack: Yea. So we weren’t allowed to eat carbs at all. And I remember I was in my hotel room late at night, and I just had bread. I just had this thing of bread. I was so tempted, I even had it in my hand, and then right here… and then I swear to God I said out loud, (Jack and Dayo together) "NOT TODAY". (everyone laughs as he motions like he threw it) It was like a bomb or something… just NOT TODAY. It was insane.
Dayo: So every time we looked at bread from that day on, we’d be like, (Jack and Dayo together in deep voices) "NOT TODAY".
Lisa: What was your favorite restaurant? Where’d you guys always go?
Dayo: Nubos.
Jack: What was that like Whole Foods-esque place?
Dayo: Wasabi.
Jack: Oh yea, Wasabi.
Dayo: Wasabi was nice.
Jack: Wasabi was great. They had these things called the Godzilla Roll. I basically introduced you and Jackie to sushi
Dayo: Yea. Ooh Godzilla roll!
Jack: I basically introduced you and Jackie to sushi. It was like this whole new world for you.
Dayo: I’d never eaten sushi in my life. I was like against raw fish. Entirely. Me and Jackie were. And then we had this thing called the Godzilla Roll and ugh and we’ve been hooked ever since.
Jack: Whenever we get together now you know it’s always a sushi place or like Umami burger.
Dayo: I mean here in LA, the Umami Burger is like - we’re there.
Tiffany: I have a segue question.
Courtney: We wrote this question like, beforehand
Tiffany: We wrote it down.What is your favorite thing to eat at Umami Burger? Cause I love Umami.
Dayo: Ahi tuna burger
Jack: Ahi tuna burger ya.
Tiffany: Ooo! I like the cheese tots.
Dayo: Ya, those are nice.
Jack: I like their ketchup. If I could just drink that ketchup I would be happy.
Dayo: The sweet potato fries, with like the sugar on top.
Tiffany: Oh, I have never had that!
Dayo: It’s good stuff. It’ll change your life.
Jack: Yup.
Lisa: Jack, have you figured out your autograph yet?
Jack: I have (gets more excited) I have! I am so excited. My roommate helped me. And it was very...
Dayo: Do you remember the first time we were at the hotel and the guy came up and asked for the autograph…
Jack: Yes. I was like OH GOD!
Dayo: Dude, I don’t know what I wrote man...
Jack: At first my signature was horrible. My driver’s license is the worst thing ever. It’s like Jack Sort of, and then like Q U, and then it looks like someone drew a very crude treasure map. Ugh, but no, I sat down with my roommate and worked out this whole thing. It’s good. But the terrifying moment was when we had this poster we were going to get for Gary, and everyone was going to sign it. And it was my turn and I was like, it has to be good. The pressure was on.
Dayo: It’s the one he’s gonna have on his wall.
Jack: After that, I was like I gotta it together.
Dayo: This is awesome man. I visit all your sites religiously. This is craz.y.
[At this point, there were DVD’s brought in for them to start signing.]
Lionsgate: I am gonna have you guys start signing a few. This is one that’s out there for Jordin. So if you can write Jordin…
Jack: And now the pressures on, gotta see if I can do it.
[They continue to sign for a bit.]
Dayo: What’s your take on sandwiches... (laughs)
Courtney: Well, you know we watch all the interviews, and you guys have been asked like every single question, and I don’t wanna be lame by asking you a question you've already answered.
Jack: You know I am actually surprised that’s the first time I have heard that.
Dayo: you know what’s actually the one that I get like every single day.. "Did you read the books?"
Beth: It boggles everyone’s mind. Like all the fan site runners, when people ask that to you.
Dayo: It’s like are you kidding me.
Courtney: No, we didn’t do our research at all.
Jack: No we just kinda…
Dayo: I just winged it.
Jack: I just showed up man. Did what they told me. I thought I was filming Harry Potter.
Dayo: Wait. What?
Jack: I don’t know.
Dayo: (shocked) This isn’t Harry Potter?
Lionsgate: I’m gonna keep watching you and see at what point you just start writing a D period.
Dayo: D
Jack: We’re D J man.
Dayo: Ah Yea. DJ Thravel.
Jack: DJ Mesh.
Dayo: DJ Moresh.
Jack: That could actually be a name, DJ Moresh.
Dayo: Swaged in, swaged out.
Jack: Why your dimples so swag
Dayo: I don’t know girl, you gonna have to ask Big G Upstairs. He’s the one who made them.


A million thanks to Lionsgate for such a great opportunity, and big thanks to our buddies over at TheHungerGamesMovies.net, Down With The Capitol, and Mockingjay.net!

Check out the other fansites posts about the nights events!
DWTC
TheHungerGamesMovies.net
Mockingjay.net
Posted by Welcome to District 12! (Courtney) at 9:00 AM