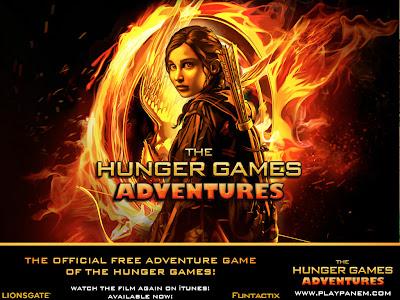 Funtactix, a worldwide developer and publisher of social games based on the world’s premiere entertainment brands, in partnership with Lionsgate, today announced that The Hunger Games Adventures – the official social game for the Hunger Games franchise – is now available for iPad. With this release, tablet gamers can now explore what Facebook gamers have continued to enjoy in-game, including new, authentic Hunger Games stories and content such as the Map of Panem!

Since its debut in March on Facebook alongside the release of the blockbuster film in theaters, The Hunger Games Adventures has quickly become one of the top adventure games on the platform, receiving stellar reviews from critics and fans alike across its player base of millions. As tablet and mobile gaming continues its rapid growth, Funtactix and Lionsgate have provided a new way for fans of all ages to experience the game on the iPad.

“Bringing The Hunger Games Adventures to the iPad allows a new group of fans to experience what millions have played on Facebook,” said Sam Glassenberg, CEO of Funtactix. ”Using the iPad’s touch screen creates a more intimate and accessible experience for fans as they journey through the deep, authentic world on a quest to become the next hero of Panem.”

In The Hunger Games Adventures, players embark on a daring adventure beyond the fence of District 12, getting a chance to explore the other districts in Panem for the very first time. By completing new chapters, fans uncover character back-stories and receive new and exclusive content from The Hunger Games franchise, not available anywhere else. Along the journey, they are accompanied by their favorite characters – including Katniss, Peeta and Gale – for help and guidance as they complete quests and explore the vast universe of Panem.

Funtactix and Lionsgate continue to work together to provide the game’s audience with a steady flow of fresh, dynamic content that continues the story of The Hunger Games universe in between film releases. Recently, players were presented in game with the first-ever map of Panem depicting the actual locations of Districts 2, 11 and 12 as well as the Capitol in the post-apocalyptic world created by Collins. Revealing such a central piece of a major global franchise's canon inside a social game had never been done before. The release of the map of Panem raises social gaming to a whole new level: realizing the potential of social games as a mature gaming and storytelling platform. The remaining districts will be revealed to both iPad and Facebook players as they are introduced to the game.

The Hunger Games Adventures is now available for free from the App Store on iPad or at: http://itunes.apple.com/app/hunger-games-adventures-official/id559845361?mt=8