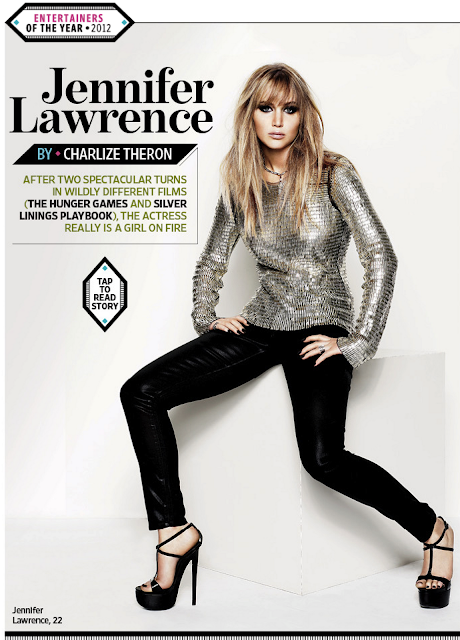 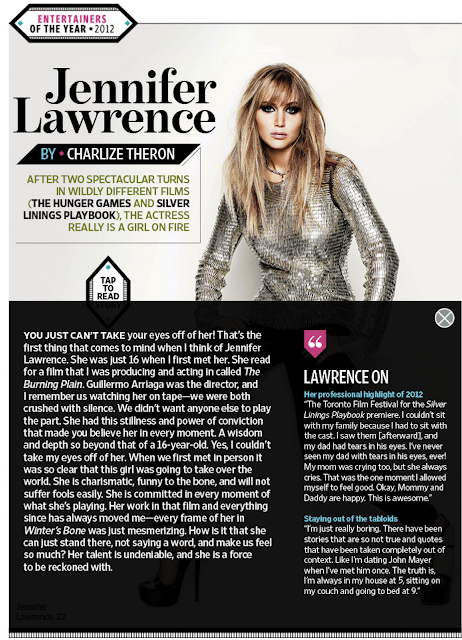 In addition to this there is an article on EW's website which has a little more content than the above scans. Check it out:

ENTERTAINMENT WEEKLY: You’ve had an extraordinarily successful year. Is there a moment or decision which makes you particularly proud?
JENNIFER LAWRENCE: Personally, yes. Business-wise no. I don’t think I’ve ever done that. No matter what anyone says, I’m my own worst critic.
Well, if I was talking to your parents instead, what might they say was their proudest moment?
At the Toronto Film Festival for the Silver Linings Playbook premiere. I couldn’t sit with them because I had to sit with the cast. I went out first [afterwards] and then I saw them and my Dad had tears in his eyes. I’ve never seen my Dad with tears in his eyes, ever. My first thought was that someone hurt him or something! ‘What’s happened to my Dad?’ My mom was crying too but she always cries. They were really proud. That was probably the one moment I allowed myself to feel good and proud. ‘Okay, Mommy and Daddy are happy. They’re proud of me. This is awesome.’
You said you’re pleased with some of your personal decisions. Do you care to share a triumphant moment?
I was going to buy a place and then I realized that I’m just not old enough to own property. Everybody else was — Josh and Liam [her Hunger Games co-stars] bought a house, I was like, Okay I got to buy a house, that’s what’s supposed to happen. And then I finally was like ‘You know what? I’m going to rent until I’m old enough to buy a house.’ That was a huge weight off my shoulders.
Before the Hunger Games came out you told me you knew your life would be forever altered and that it was rare to meet a famous person who wasn’t jaded? After this year of massive attention, do you feel jaded yourself?
I’m different. It’s exciting for about five minutes — like walking through a restaurant and hearing people say your name to each other. After a while it starts to get creepy and scary and you feel cynical and now I do this thing where I’ve got this tunnel vision where I only see people that I recognize. I don’t look at strangers because I know if I look I’m going to make eye contact with people. I always imagined I would stay the exact same and I would be just as happy. And I’m not. It’s not that I’m ungrateful at all. Or unhappy. It’s just that people are different and it creeps me out so I only want to be around the people who still treat me the same. I don’t go home and brush my teeth and think I’m brushing my teeth like a famous person! You don’t notice it at all until you talk to a stranger and you realize they’re treating you differently and looking at you differently.
And yet you seem to have avoided the ugly tabloid attention faced by other young stars.
I’m just really boring. [Laughs] They’ve tried. There’ve been stories that are so not true and quotes that have been taken completely out of context. Like I’m dating John Mayer, when I’ve met him once. But the truth is I’m always in my house at five and sitting on my couch and going to bed at nine.
That sounds like lots of time for pop culture! Who and what entertained you this year?
What don’t I love about Game of Thrones? I was shooting in Prague so I didn’t have TV and I just got box sets of DVDs. I just watched Game of Thrones straight. I was obsessed, like I haven’t been since my Harry Potter days. Let’s see, my favorite movie was probably Ted. It is so, so funny. Any my favorite performance? Any time I see John Hawkes. He was so good in The Sessions. He always does that to me.