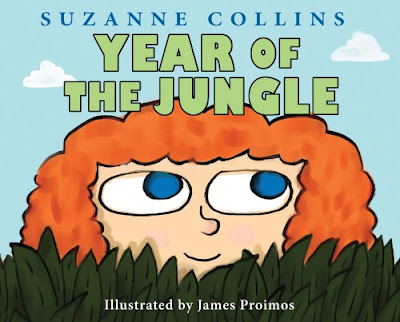 We know that Suzanne has said that she doesn't write children's books, she writes about war for children.  Suzanne based The Hunger Games on a lot of her own experience of what she knew from her Father's experience of the Vietnam War. Scholastic has announced that they are publishing her autobiographical picture book about this time in her life. Check out the press release below!

New York, NY — November 29, 2012 — Scholastic, the global children’s publishing, education and media company, today announced the publication of Year of the Jungle (September 10, 2013), an autobiographical picture book by Suzanne Collins, author of the worldwide bestselling The Hunger Games trilogy, with illustrations by James Proimos. Scholastic also announced plans to publish the trade paperback edition of Catching Fire (June 4, 2013, ISBN: 978-0-545-58617-7, $12.99), as well as repackaged paperback editions of Collins’s bestselling The Underland Chronicles, a five-book series about Gregor the Overlander, featuring all new cover art (Summer 2013). Scholastic will publish and deliver the books through all of its distribution channels.

Year of the Jungle ($17.99, ISBN: 978-0-545-42516-2), to be published on September 10, 2013, is an autobiographical picture book for ages 4 and up, based on the year Suzanne Collins’s father served in Viet Nam. The book is illustrated by James Proimos, an acclaimed picture book author-artist and television writer/animator. Longtime friends, Collins credits Proimos for initially suggesting she write books for children while they were working in children’s television together.

In Year of the Jungle, when young Suzy’s father leaves for Viet Nam, she struggles to deal with his absence. What is the jungle like? Will her father be safe? When will he return? The months slip by, marked by the passing of the familiar holidays and the postcards that her father sends. With each one, he feels more and more distant, and when he returns, Suzy must learn that even though war has changed him, he still loves her just the same.

“The Underland Chronicles, with its fantasy world and eleven-year old protagonist, Gregor, was designed for middle readers,” said Suzanne Collins. “The Hunger Games Trilogy features a teen narrator, Katniss Everdeen, and a stark dystopian backdrop for the YA audience. Year of the Jungle attempts to reach the picture book readers by delving into my own experience as a first grader with a father deployed in Viet Nam.”

“One of the things Suzanne has done so masterfully in The Hunger Games and The Underland Chronicles is to give readers an honest portrayal of the effects of war,” said David Levithan, VP, Publisher & Editorial Director, Scholastic. “Now she has done it for a younger age group, in a way that is sympathetic rather than scary, relatable rather than raw. This is something that Suzanne, as a military child, lived with for many years, and it’s something that all families will be able to share, whether they have a personal connection to the military or not.”

About the origins of Year of the Jungle, Collins explains: “For several years I had this little wicker basket next to my writing chair with the postcards my dad had sent me from Viet Nam and photos of that year. But I could never quite find a way into the story. It has elements that can be scary for the audience and it would be easy for the art to reinforce those. It could be really beautiful art but still be off-putting to a kid, which would defeat the point of doing the book. Then one day I was having lunch with Jim and telling him about the idea and he said, ‘That sounds fantastic.’ I looked at him and I had this flash of the story through his eyes, with his art. It was like being handed a key to a locked door. So, I just blurted out, ‘Do you want to do it?’ Fortunately he said yes. That afternoon, on the train ride home, the book started unfolding in my head. There’s a natural humor and sense of fun to his drawing style that makes the story approachable. As the emotional life of the main character evolves into darker places, the pictures beautifully keep pace with it, but they never lose that Proimos quality. His art made telling the story possible.”

“I had decided that I would not draw a single thing for a year and concentrate only on my writing,” said James Proimos. “In fact, I told this to Suzanne only minutes before she asked me to illustrate her next book. How could I refuse? The idea she laid out over burritos and ice tea during our lunch was brilliant and not quite like any picture book I had ever come across. The writing is moving and personal. What Suzanne does so well here is convey complicated emotions through the eyes of a child. The art had to do the same. We did not want this to be the kind of book that grownups put on a shelf, but instead be the kind of book that a kid would want to read again and again. Luckily, my brain is very much in touch with my first grade self and my art skills have never left that general vicinity.”

We're really thrilled about this project. It has always been intriguing how Suzanne has tapped into her personal experience creating The Hunger Games, so we will be interested to check this one out when it releases in 2013.
Posted by Welcome to District 12! (Courtney) at 2:47 PM