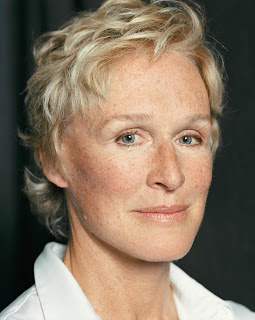 Welcome to the very FIRST EDITION of "Campaigning for Coin"! Over a year ago, Hunger Games fan sites came together to take a look at Finnick hopefuls in a series known as "Finding Finnick Odair".  Today we bring you the very same, but this time we are taking a look at Alma Coin hopefuls for the Mockingjay films. In the upcoming weeks the fan sites will be examining choices that may be suitable for the role of Alma Coin. As you read these posts, please comment on who your fan cast for Coin is! Of course we don't need to remind you....

Today fan sites take a look at Glenn Close. Here's what we had to say:

Welcome To District 12
Courtney/Tiffany: Glenn Close for Alma Coin is something we never knew we wanted until it was first suggested. She quite often plays a woman in power, like the Vice President in Air Force One, and can play a great villain, like Cruella De Vil in the live action 101 Dalmations movies. Some may argue that Glenn Close is too old, but we think that's silly since the casting in The Hunger Games has not limited actors for their age. For example, Lenny Kravitz and Donald Sutherland are WAY older than the characters they play, yet they are fabulous additions to the franchise. We're more concerned with the actor themselves than the age, provided that they are not on the extremes of the age scale. More than anything, it would be nice to round out the Hunger Games cast with yet another critically acclaimed actor. While never having won an Oscar, she has been nominated several times and has won everything else under the sun. We think Glenn Close has the look as well as the range to play good, evil, and a woman in power: All necessary traits to play Alma Coin.

Down with the Capitol
Arianna: Honestly I’m all in for Glenn Close as Coin. I never thought of her until her name was brought up for this project. She could most definitely play the part as Coin aka an evil woman in power, especially after playing parts in movies such as Cruella De Vil in 101 Dalmatians and her role as VP in Air Force One. She also has the perfect Coin look which is a bonus. Glenn would only add amazingness to the already stellar cast we have.

HG Fireside Chat
Savanna: I adore Glenn Close and think she's immensely talented, though I haven't seen much of her recent work. I loved her as Queen Gertrude in the 1990 film adaption of Hamlet, and her performance as Norma Desmond in Sunset Boulevard is just...magnificent. To say the least. But for some reason, I'm not too into the idea of Close as Coin. Maybe it's because she's too big of a name and too recognizable. Honestly, I'd rather see a lesser-known actress have a chance to take on the character and have it become a career-defining role. That being said, Glenn Close can do absolutely anything, and if she were to be cast as Coin, there's no doubt in my mind that she would be phenomenal. She does the cold, hard, calculating thing very well and would certainly be a believable leader. The best thing she has going for her, in my opinion, is her powerful, almost magnetic presence; whether she's onscreen or onstage, it's impossible to not be drawn to her.

HG Girl on Fire
Amanda: This is actually a hard call for me. There is absolutely no doubt in my mind what so ever that Glenn Close could pull this role off. I think she could, and she would extremely well. I think she has proven her acting chops time and again especially with this type of role. One of the things I think is very important for the role of President Coin is that the actress not be too likeable, and be able to pull off being the “bad guy.” I want to be happy when we get to the end, and (spoiler alert) Katniss murders Coin, which in this scenario I don’t think would be a problem, especially when I picture that scene in Fatal Attractions where she’s boiling the pet rabbit. My one and only problem is that Glenn Close does not fit the mental picture I have of Coin. I pictured her as being younger with darker hair, but with that being said I think with hair and makeup that would be and easy fix, and I’d rather see someone who could play the role very well, and not concentrate on looks so much.

Mockingjay.net
Crystal: I'm not the biggest fan of Glenn Close. I know, I know, she's got a stack of Oscar nominations, but that doesn't mean I think she's consistently a great actress. I've already seen her play an executive office role in Air Force One and for those of you that haven't seen it, she was pretty awful while I thought Harrison Ford, Halle Berry, and Gary Oldman carried off their silly cliche action roles off rather well. I need someone who makes me feel like withering into the floor and an actress who has been in Mars Attacks! is just hard for me to take seriously. She's got the hard look, but for some reason I'm just not confident she'd pull it off with the right amount of cold Coin swagger.

My Hunger Games
Kristen: Obviously, Glenn Close has had quite a bit of commercial success in family movies, including her hysterical take on Cruella De Vil in Disney’s live-action version of 101 Dalmatians—but let’s not forget the role that really made her a star: Alex Forrest in the 1987 thriller Fatal Attraction. If you haven’t seen this movie (and if you're old enough to watch R-rated films) stop reading right now and go watch it. I guarantee you will never see a creepier interpretation of the sociopathic “woman scorned” character on film. In the interest of keeping spoilers to a minimum, let’s just say that Glenn Close plays a manipulative nut-job so well, she’ll make your skin crawl. That being said, I would absolutely LOVE to see Glen Close as the ruthless, power-hungry Alma Coin. I think she has amazing range, and is beyond capable of convincingly portraying the cunning, unscrupulous leader of District 13.

The Hob
Angie: When I think of actresses that could portray our infamous President Coin, Glenn Close does seem to fit the generic Coin mold. Glenn is a little older than President Coin, but I still think she could pull off the character. She possesses the "look" that President Coin should have: shoulder length gray hair, eyes that could bore into any soul, and a serious stature. What sets Glenn apart from the rest in my opinion is her previous role as Cruella de Vil in the 101 & 102 Dalmations movies. Glenn shows that she can play the role of a ruthless, selfish villian that truly only has one main objective. The characters are alike considering in both films they are willing to do or kill whatever or whomever they need to get their way - whether its puppies or medics or children.

Victor's Village
Rebekah: I'll be blunt, Glenn Close is far from my favorite choice for Alma Coin, but is she the worst choice out there? Far from it. Glenn brings everything to the table that would be required of an actress in a role like Alma Coin, but to me it would be flat out type casting. See, Glenn is known for playing tough ladies (Damages), scary ladies (Cruella DeVille), and oh yeah-- creepy and/or weird/crazy ladies (The World According to Garp, Fatal Attraction, Stepford Wives). I'd even say she's made a career of it. Personally I think taking on a role like Alma Coin wouldn't be challenging for her at all, and if I was Glenn-- I'd want to play a character that's not something I've technically done before. Aside from that, logistics get in the way as well, as she's just signed on for another franchise just this week, Guardians of the Galaxy. So, I'd go so far as to say that adding The Hunger Games franchise on top of that would be incredibly taxing on a lady who's over 15 years older than Alma Coin is supposed to be, and if you're a regular reader of my work on Victor's Village, you would know I'm not a proponent of casting an older actress in this role. Glenn Close? I'll say it loud, and clear, I don't think it's going to happen. Next!

Stay tuned for more Coin fan casting. Sound off in the comments who you hope to see as Coin!
Posted by Welcome to District 12! (Courtney) at 9:00 AM