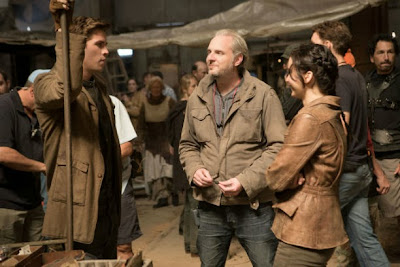 We are......rather speechless. In an interview with Francis Lawrence, he reveals that the VFX for the monkey mutts in Catching Fire have been done by WETA Digital.

Will this one have better CGI?

Uh, yeah. I think the effects are phenomenal. If you know the book, there’s a monkey-mutt attack, and Weta, who did Rise of the Planet of the Apes and King Kong, did the monkeys for us.


For those new to our site, we may have mentioned a few times that we are scary big fans of the Lord of the Rings. This news almost made us pass out on the floor as if the most handsome man in the world were to say "hey" to us on the street.

For those who are wondering, "What's WETA"? Here's a recap of what is one of, if not THE BEST and most impressive VFX company. They have won academy awards for all three Lord of the Rings, King Kong, and Avatar. They also are responsible for Rise of the Planet of the Apes which was nominated for an Oscar last year. That film was renown amongst the tech community for the impressiveness and realistic depiction of the apes.

So knowing that this world renown VFX company that has mastered the art of depicting monkeys will be doing the crazy monkey mutts for Catching Fire, we are just sitting here in awe. HOW LUCKY ARE WE?!

By the way, be sure to read the full interview with Francis Lawrence, it's got some cool details about Catching Fire!