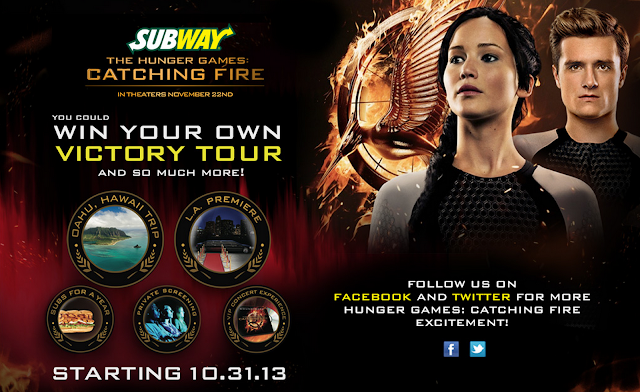 Back in July we posted about SUBWAY partnering with Catching Fire. Looks like the sweeps mentioned in the press release will soon be here:

SUBWAY® restaurants in the U.S. and Canada will be fired up in anticipation of the film’s release, with a number of promotional assets planned for in-store, social, online, and broadcast. A special product line will be featured with thematic ties to the film, along with specially marked packaging with codes encouraging customers to engage online for their chance to win prizes. SUBWAY® customers can also pose with their favorite character’s standees in the restaurants and are invited to share photos on social media for additional chances to win.


The sweeps start noon on the 31st and open to U.S. residents only. Prizes include a trip to Hawaii, tickets to the L.A. premiere, subs for a year, a private screening and "VIP concert experience" as shown in the promotional image. Sounds like a lot of cool prizes are up for grabs!

CatchingFire.Subway.com
Posted by Welcome to District 12! (Courtney) at 2:31 PM