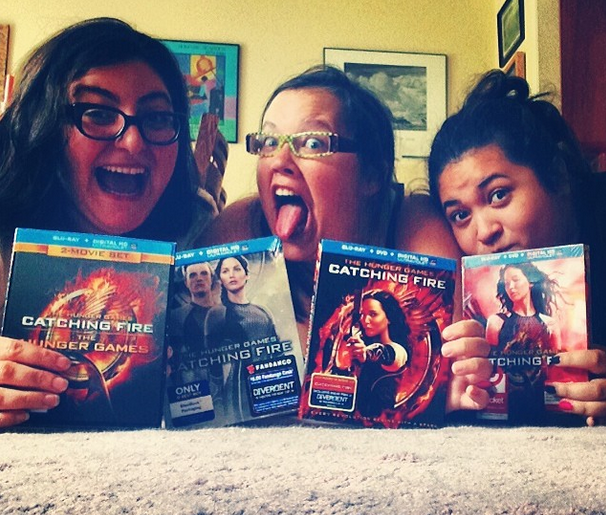 Still stumped on what's the best version? Here's a look at all of them and what our thoughts on the special features:

Courtney- It's apparent to all of us that the Jabberjay/Mockingjay explanation is a bit of a travesty to leave out. I'd like to think that they want to make a bigger deal of it explaining it in Mockingjay, which is why they cut it out. I hope, hope, hope. While the other deleted scenes are cool, I wish there was more. In fact, there ARE more as mentioned here in there in the documentary or mentioned in the audio commentary, they just aren't finished scenes. Its true that those types of deleted scenes (the ones that don't make it to the final draft) are rarely scene on DVDs but perhaps we can hope they release them after all the films come out along with the ones from the first film which TOTALLY EXIST. Overall, thank you so much Francis for giving us the deleted scenes we so craved!!

Tiffany- One of my biggest criticisms of the movies in general was the lack of explanation of Jabberjays and Mockingjays. The one deleted scene that stood out to me the most was a scene between Plutarch and President Snow that does just that. And I have to say... I am a little upset that it wasn't included in the final cut of the movie. The other scene that stood out has Katniss and Finnick in the training center with Finnick tying knots, which, though I can see why it was cut out,  explains Katniss's knowledge of noose-tying for the Seneca Crane dummy scene.

Denise- Most of the deleted scenes were obvious as to why they were deleted, as most tend to be. One in particular scene explaining the significance of the Mockingjay as a symbol- not so much. Why this was deleted makes literally no sense to me unless they decided to wait on that explanation to show in Mockingjay. I also loved the scene of Plutarch replacing the Quarter Quell envelope with the one that leads to this particular version and the scene of Finnick showing Katniss how to tie a noose, which comes in handy when she hangs "Seneca Crane".

Courtney- HOLY HOVERCRAFT, this documentary is IMPRESSIVE. It's much longer than your normal special features documentary. While those tend to last 45 minutes, this thing is about 2 hours long. They go into INSANE detail on every part of the filming process, which makes my heart sing. All of us are crazy special features consumers and our model is the Lord of the Rings Extended edition. While no other Blu-Ray has come close to that level, Catching Fire Blu-Ray is definitely on the right track. It has given fans an above and beyond amount of content. I would say the Blu-ray edition is a MUST HAVE. I mean....if you want to see the secret easter egg....

Tiffany- The behind the scenes documentary is long and has nine parts. The subjects range from new and returning cast to the different stages of filming and of course the different parts of post production. The cast goes into detail on what it was like for them filming in Atlanta versus Hawaii, how freezing and miserable the water park scenes were and how beautiful Hawaii was. The post production sections were incredibly enlightening. It was amazing to see how much of the arena was fabricated. The costumes and makeup had their own section, and they go into the logistical challenges on styling the Capitol citizens at 40 stations with unique looks for each person. And of course there are the funny anecdotes from the cast and amusing moments, like Josh ripping his pants. During the credits of the documentary, there are some stray behind the scenes clips, like Josh and Jennifer swinging on a rope.

Denise- I love love love the documentary because I am a film nerd who has spent countless hours watching LotR extras because of the detail they go into about the making of a film. This one touched base on so many aspects that go into making a film. We got to learn about the casting process for the new characters and how they got such incredible actors in these roles. We got an in depth look into the makeup and wardrobing departments and the ridiculous lengths they had to go through for scenes like the party at Snow's mansion. We got to learn about preparing a water park to look like the Cornucopia. We got to learn about the training and the film making process. This documentary could be it's own movie about the process of filmmaking. You even learn about the different film and cameras they use! To someone who is just casually a fan to film students, this documentary is both entertaining and informative.

Courtney- I sat down and watched the DVD commentary with Francis Lawrence and Nina Jacobson and it is a really good listen. They do give a lot of information, much you would know from watching the documentary but there is some new info in their too! A while back we got some info that they filmed in L.A. at Universal, but had no idea what they did. Turns out they used it to film pick up shots of people diving and swimming in the arena. They even mention some things they will probably do in the next film such as explain the Avoxes. I highly recommend checking out this feature!

Courtney- I give these special features a 9/10 because it really did go above and beyond with the documentary. There's always room for improvement, we want ALL the deleted scenes as well as more set footage. I mean we can watch Josh and Jen be silly all day long. I am incredibly thankful that Lionsgate bumped up the amount of contents up a notch since last time. Lionsgate, if you are reading this please know that we appreciate all the content you have offered but THE MORE THE BETTER!!! Honestly we can never get enough of it, but you have floored us with that 2 hour documentary. Fantastic job!

Tiffany- It's great that the 9-part documentary is included in all the Blu-Ray packages. Though some might think it's long, for me, the more information the better. It encompassed a lot and hit on the various areas of filmmaking in a fairly balanced way that can satisfy a movie fan like me. The deleted scenes weren't enough, in my opinion. Where was the scene with Peeta and morphling in the training center painting that we saw a still of but still have yet to see? So many were very quick moments, but I'm thankful to have gotten deleted scenes.

Denise- The amount of work and information that went into making this rivaled the Lord of the Rings extras, which I'd say is the definitive version of dvd extras. Though I wasn't able to watch it all, owing to real life getting in the way, I was extremely satisfied and am excited to watch more!

WHICH DO I BUY?

Pretty simple choice because it's the only option with an extra disc. With the extra disc you get 45 minutes of interviews that mostly talk and discuss about the books and their themes as well as the cast and crew's deep connection to one another. Honestly, I wish there was more set footage on this disc but I suppose we can't have everything. It's still enjoyable to watch!

Aside from the content, the box and case is VERY ideal. It opens up like a book and has a very sleek look and feel. DEFINITELY get this version! Here's the details:

Tiffany- The Best Buy exclusive includes the main Blu-Ray disc that includes the behind the scenes documentary and a digital download with no DVD. It comes in a metal casing with Katniss and Peeta on the cover. This is a great one to have if don't need a DVD since the case itself is fairly nice. 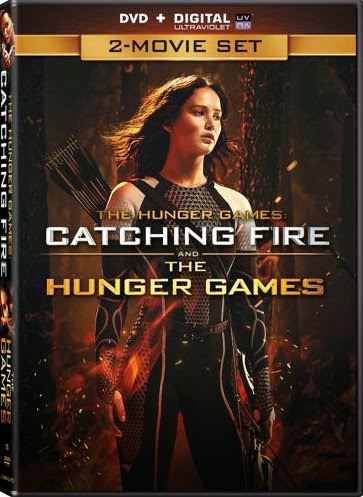 This is straight up DVDs of both films, no special content whatsoever. If that appeals to you, then this is for you.

If you don't own a Blu-Ray player I really highly recommend getting one if only for the Catching Fire DVD. There's hours of content to watch, not to mention the Blu-Ray holds a secret from the rebels...
Posted by Welcome to District 12! (Courtney) at 12:59 PM