Chapter 25: A Creature as Unquenchable as the Sun 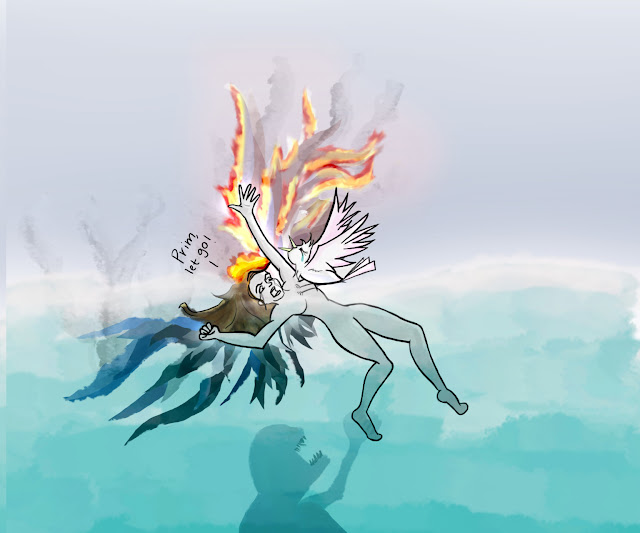 “A creature as unquenchable as the sun.


A fire mutt knows only a single sensation: agony. No sight, no sound, no feeling except the unrelenting burning of flesh. Perhaps there are periods of unconsciousness, but what can it matter if I can't find refuge in them? I am Cinna's bird, ignited, flying frantically to escape something inescapable. The feathers of flame that grow from my body. Beating my wings only fans the blaze. I consume myself, but to no end.”


We continue our Mockingjay Part 2 Countdown with Chapter 25 in which Katniss has a dream in her unconscious and damaged state after the parachutes go off in the City Circle.

I can't even begin to make a decision on whether or not Francis chose to adapt Katniss' dream post parachutes, but I have always gravitated towards the imagery Suzanne created during this dream sequence. It's not exactly a necessary scene, but it is good representation of Katniss letting go of Prim using all the symbolism we've come to be familiar with this far in to the story. As for this showing up in the film, I wouldn't hold my breath but at the same time I would never doubt Francis to make it happen.

Although I chose to spotlight Katniss' dream, this is by no means the most important event in this chapter. Hoooo not by a long shot! When Katniss awakes, she becomes aware of the situation and the precious thing she has lost. She doesn't talk, and relapses back to her old habits of climbing in small spaces, mentally reminding herself of who she is. Then Katniss walks into Snow's rose garden and they proceed to have THAT conversation.


I for one am extremely interested to see how the film will handle this scene and the overall perception of Coin's character given the almost friendly characterization of her in Mockingjay Part 1. There is so much aftermath after the parachutes, the whole event surrounding Coin and her actions is just one of a few important events I hope are dealt with very accurately. I'm not too worried though, Francis Lawrence always has a great handle on what makes these books important and adapting them appropriately.
Posted by Welcome to District 12! (Courtney) at 8:30 AM