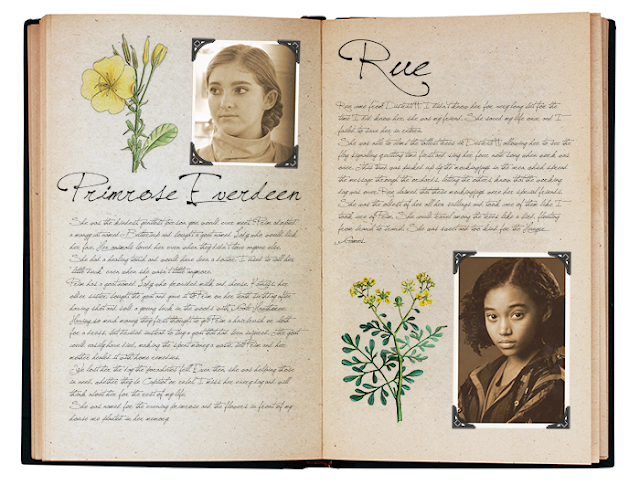 We're almost to the end of Mockingjay and our countdown, and as the movie draws nearer, we're at a chapter that we're anxious to see on film.

After Katniss kills Coin, she's taken to her old room in the Training Center as her trial goes on without her. Will we see Katniss's trial? Will she be there or will they hold her in the room like in the book? So many questions about how this part of the book has translated to the movie, and we haven't had any indication either way. Since the books are limited to Katniss's POV and the movies aren't, we could very well see the discussion about what to do with her.

Eventually, Haymitch takes her home to District 12. He's charged with looking after her since her mother will not be coming home. Katniss struggles to look after herself, only eating when Greasy Sae comes over to cook for her. She comes across Peeta when he finally arrives back in District 12. He's planting evening primrose in her yard in memory of Prim. Katniss finds out Gale won't be coming back. For the sake of pacing in film, this might not be as dragged out in the book. It's likely Peeta may come back with Katniss and Katniss finds out that Gale won't be coming back sooner.

Katniss tries to go hunting, but she's too weak. Buttercup shows up when she comes back, and Katniss yells at the cat that Prim isn't coming back. We're praying this scene makes it to the movie as it resonates with a lot of fans. This triggers the beginnings of Katniss's recovery. Afterwards, she speaks with her mother and Dr. Aurelius on the phone. Katniss decides to fill a book with memories of the people she's lost and does so with help from Peeta and Haymitch. It would be a nice touch to see it in the movie.

At the end of the chapter, she reveals that she and Peeta fall in love:

Cue intense crying and sobbing from everyone in the audience. Probably.

Next up on our Countdown, we'll have the infamous Epilogue to lead us into the release of The Hunger Games: Mockingjay Part 2.
Posted by Tiffany at 5:09 PM