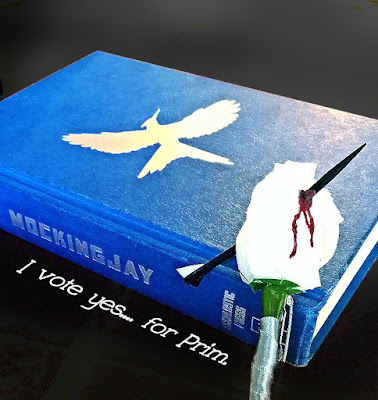 We are almost at the end! Today we will be discussing Chapter 26: The Mockingjay Deal. In the aftermath of Katniss' confusion about who was really behind the bomb, she reverts heavily to her District 13 habits. She is far worse now than ever, and the notion that the rebels are behind the worst act of all is likely sending Katniss into insanity. It'll be interesting to see if they include Haymitch's MEGA HARSH quip when Katniss tries to confide in him. “More boy trouble?”

To me, the aftermath of everything is the most interesting and important part of Mockingjay. Suzanne Collins' whole point of writing this series was to illustrate the destruction and reality of war. The aftermath of war is lack of closure, consequences, war tribunals, and finally-- recovery. There's a ton happening all at once at this point in the story: Katniss grieving and trying hold on to sanity, finding out the rebels were probably the guilty party, slipping further into insanity, prepping for Snow's execution, and all of a sudden having to make a what will be an earth-shattering decision. A final Hunger Games.

Five years ago, we started on tumblr (we were fuckyeahdistrict12 haha) and The Hunger Games community was pretty small. All we really had to go on was fan art and book discussion. The topic we talked about the most by far was The Mockingjay Deal. It's quite a shocker to see that Katniss voted yes... for Prim, and although most everyone has a similar theory, many young readers often asked why she said yes. Katniss knows for sure at that moment who was behind the parachutes, what kind of leader Coin is, and that “nothing has changed.” It's the last thing Katniss needs to hear to make her final decision. Besides, Katniss isn't planning on being around much longer anyway. Gotta admit, this whole section is what I'm most anxious to see. Will we get to see a trial? How will the Mockingjay Deal scene happen? We're almost a week away from finding out!
Posted by Welcome to District 12! (Courtney) at 8:30 AM