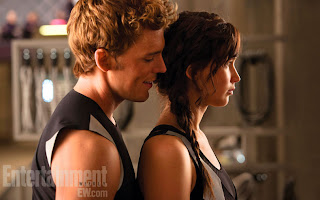 Ah, it's the details that really get us when watching an adapted film. While being interviewed by Teen Vogue, Sam Claflin mentions that for most of the arena scenes Finnick is carrying Mags (Lynn Cohen) on his back. There's been a drought of Catching Fire news lately and Hunger Games fans will latch on to any bit of information at this point!

TV: Your training sounds intense!
SC: From the moment I set foot in Atlanta, they had me at the gym, working out twice a day. And then stunt training, it's nonstop. To be fair, I spend a lot of the film carrying an old lady on my back, as Finnick carries Mags for the majority of the arena scenes. I feel like every day of filming is a workout, running around Hawaii with little old Lynn Cohen on my back. As for my diet, I think I've eaten more chickens than there are in the world. [Laughs] I would eat chicken and asparagus for lunch and dinner, and for breakfast I'd have an omelet and oatmeal. And I had that every day for four months. I've talked to my friends and said, "Oh my God, I'm so depressed, I just want a burger." And they're like, "You don't know how lucky you are to be doing what you are doing."

Check out the whole interview at TeenVogue

Also, check out a video of his Teen Vogue photoshoot for the issue. Sam Claflin cuddles with an adorable dog so you might wanna check it out...