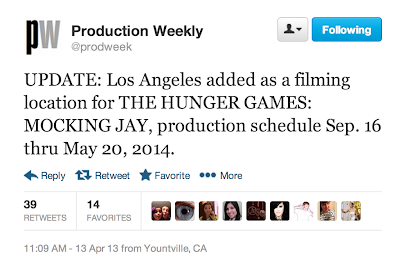 As a Los Angeles resident, may I just say "FINALLY"! In a town where we offer the best and largest spaces and soundstages for filming, we are happy to know that L.A. has been added to list of locations in which Mockingjay will shoot.

We also reported earlier about mysterious Hunger Games filming happening at Universal a few weeks ago, so it seems like this information fits with that. We will say that in reference to our report about filming we only specifically mentioned it was Catching Fire due to the timeframe and Russ Bowen's tweet about Catching Fire filming in LA. Actually, some information we gathered suggested it was for Mockingjay, but we figured that to be not accurate solely due to the timeframe of filming. Now that we know that Los Angeles has been added to the list for Mockingjay locations, could it be that the filming we reported was for Mockingjay preproduction purposes? Or perhaps that mysterious set was used for a mysterious Panem location to be used in both Catching Fire and Mockingjay? I guess we won't know until the rest of the films are released...

Source: Production Weekly
Posted by Welcome to District 12! (Courtney) at 9:00 AM