EW: Changes from Book to Film 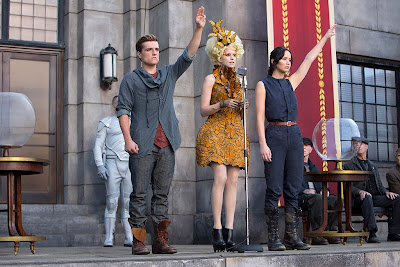 Check out three changes in Catching Fire that are different than the books:

1) “We made some changes to Peeta’s narrative,” says Lawrence. “We manned him up a little. And by the way it didn’t take a lot, just little choices to make here and there. The story doesn’t really change, his relationship with Katniss doesn’t change, he’s just a different kind of character.” For instance, in the book, the Hunger Games kicks off and Peeta is paralyzed when the other all-star tributes dive into the water. “The option is for either me drowning or sitting there like a cat batting my paw into the water,” says Josh Hutcherson with a laugh. “Either way the visual is horrible.” Easy fix: Let Peeta swim.

2) Goodbye Bonnie and Twill. In the book, Katniss stumbles upon the District 8 refugees in her father’s hunting cabin. There they reveal to a stunned Katniss the existence of District 13 and news of the spreading revolution our hero unintentionally sparked with her act of rebellion at the end of The Hunger Games. So the movie had to find a new way to introduce the news of District 13. “That’s fun,” says Lawrence, “figuring out new ways around things and new ways of doing things.”

3) Darius, we hardly know ye. District 12′s youngest peacekeeper, who pays dearly for intervening during that terrible scene of Gale’s public whipping, didn’t make the jump from page to screen. It’s another instance of storytellers having to drown one of their kittens. “It’s as agonizing for us to lose things from the book as it is for a fan,” says producer Nina Jacobson. “I want every single thing in there. But you know what? If you have to give up something in order to give more time to Katniss and Gale or to Effie as she starts to feel a conscience, you make the sacrifices in order to serve the characters and themes that are more essential.”

Our thoughts? Although some disappointments we admit, yet we cannot say we are surprised. Peeta being "manned up"? Well, Gary Ross made that slight adjustment in the first film and we agree that Peeta shouldn't be totally helpless in the arena. That being said, it's strange that Peeta knows how to swim when he would have absolutely no knowledge of that whatsoever. But then we remember it's a movie so I guess logic flies out the window.

We already knew about Bonnie & Twill, and we always thought they would be cut out of the film. We were, however, crossing our fingers for Darius. It's another tool that Snow uses to unhinge Katniss, and Hunger Games fans have been haunting IMDB to find out if he made the cut. Now that we know for sure Darius won't be in the film, I suppose it was silly to think he'd be in it since Gary Ross never established the Avox storyline. Those story points were never laid down, so I suppose it was very easy to get rid of that character.

What are your thoughts on these changes? Let us know in the comments!
Posted by Welcome to District 12! (Courtney) at 11:46 PM