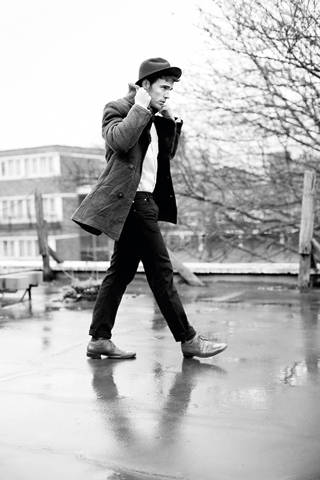 Elle magazine spoke with Sam Claflin about his role as Finnick Odair in The Hunger Games. It's a pretty great interview:

ELLE: Hello, Sam! Let’s get to it. You’ve said in previous interviews that when you went in for your first Catching Fire audition, you didn’t know what the role was for. How could that be?

Sam Claflin: I was sent over a script and there was no title to what I was reading. It was just two scenes with a character called “Finnick” and a mini-character breakdown. I started reading the scene and saw the name Katniss, and I’d just recently seen The Hunger Games, so I thought, “OK, is this a connection?” But I didn’t know it was a trilogy. I just thought it was a one-time film. So I typed Finnick Odair” into Google an all these book and fan pages came up and I was kind of like, “whoa.” So, I just went through all of it and did as much research as I could the night before.

ELLE: I was surprised to learn that you read so much of the fan reaction to your casting, because it wasn’t the most positive at first…

SC: Yeah, I think everyone was very shocked. Which I understand because it’s such an important role in the franchise.

ELLE: It just seems like a lot of actors would try to avoid that and instead concentrate on what they can bring to the role. Do you feel it helped you to know what the fans thought?

SC: It helped push me forward and motivate me to work harder. I was reading so many stories about people being unhappy that I got the role—and don’t get me wrong, I don’t sit here Googling myself 24/7—but I think part of me was eager to learn what I needed to do in order to become the Finnick the fans needed me to be. The negative comments made that easier to know what their expectations of me were.

Read the whole interview here. It's an interesting read.

It's funny to think that Sam Claflin didn't realize at first that the role of Finnick was such a big deal and was a part of The Hunger Games. Also it's great to know that he really cares about the fans' opinions, even the negative ones, so much that he took them into account in how he portrayed Finnick.