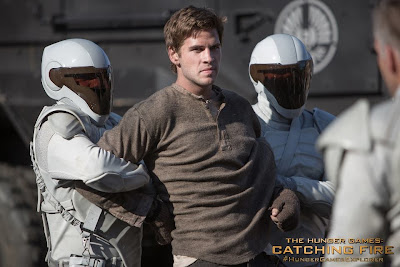 Check out this nifty interview with Trish Summerville, the costume designer on Catching Fire. She talks about her inspirations, career, and her take on the Peacekeeper uniforms.

Entertainment Weekly: How have the past 18 months or so been for you?Trish Summerville: [It's] been a little hectic. I guess I kind of went from Dragon, which I was on from start to finish — including the H&M line — almost 18 months, and from that right into doing the pilot for the Showtime show Ray Donovan, which I just got to see. They had a screening and a premiere, and it was a great time. It looks really good. I’m really excited. And I kind of went from that into Catching Fire. It’s been great, it’s been a lot of work but I like to work a lot, so it’s been really nice. It’s been a really great whirlwind and I feel really, really fortunate because the last few projects that I’ve been on, even though they’ve been a bit challenging at times, I feel really fulfilled, and I’ve gotten to work with such a great group of people. Especially when you look at all of the directors and actors involved.

About your inspiration board, can you tell me what kinds of things are on it and how they inspire you?
For each project I do a new inspiration board. For Catching Fire I think we had probably 30, 40, 60 inspiration boards, because I did them for every district and every kind of character we had. On my personal board I have some photographs of native Americans, the Maasai tribe up, which I love, the east Indian painted elephants used for weddings and ceremonies.
Whether it’s for my designs or for my own aesthetic pleasure I’m really drawn to, tribal, native, cultural ways of dress. They’re so interesting and intricate, and generally have beadwork and metalwork. I also like the ideas that there’s this traditional, ceremonial fashion, but also this function. Like, I just recently purchased an image from a water.org benefit and they do this hike up Kilimanjaro to raise consciousness about clean water. There was this image that I just loved, and it was probably 20 Maasai women, in white beading and accessories, and I just loved that they all have on contemporary shoes. People go there and trade things for their jewelry and their cloth and things like that, and so this image is just all these beautiful Maasai women in traditional garb, but then they’re all wearing sneakers and flip flops. I like that. I like that they’ll make bracelets out of Coca-Cola cans. They take what they have and then make it functional and use very interesting forms of adornment.
What else is on your personal board right now?
I have an image of an Iris van Herpen dress.
How does that inspire you?
That one inspires me just because, it looks very insect-like. It’s so modern but it’s really structural, and I love the silhouette of it. It’s very extreme. I have some [pictures of] Haider Ackermann designs. I think he’s really genius and really chic, and his clothes are quite beautiful and really sexy. I have pictures of rocks and stones because I’m interested in doing a jewelry line. I’ve been doing some sketches, and on my table I have a lot of loose stones and rocks. There’s a piece of barbed wire from a bracelet I made. And then, on the funny side of me, there are some inspirational quotes that I put up from time to time. I have a picture of Obama and the Dalai Lama, some family photos.
What are you working on next?
I’m working on a movie, hopefully next year. It’s under wraps still. I’m crossing my fingers it’s shooting in [Los Angeles], which would be amazing. I live in Los Angeles. I hear the talk of Old Hollywood and how everything was shot here, but now so much stuff is shot outside of town.