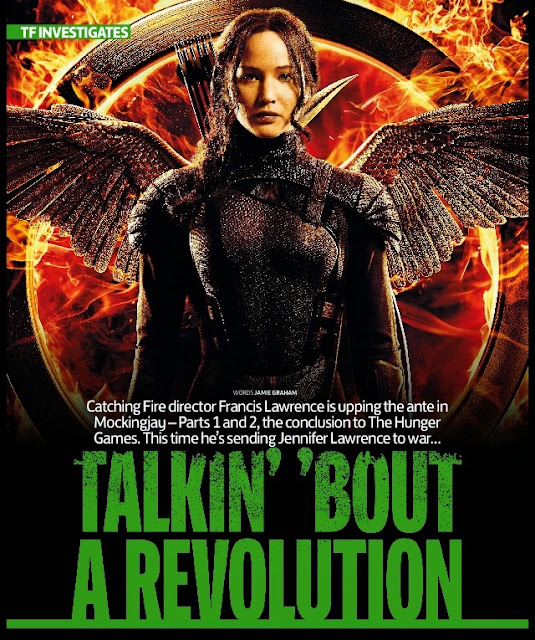 You shot Parts 1 and 2 of Mockingjay back to back. Presumably you didn’t shoot chronologically?
The efficiency of doing two movies back to back, even though it’s one long story, is that if you have built a set, you shoot the scenes for both movies on that set. But we primarily worked on Part 1 first, for the continuity of the story and also because we have to turn that one over faster. We need the editors to be cracking away at Part 1 and we need to be turning over visual effects while we’re shooting Part 2.

How does Mockingjay differ from the first two THG movies?
Catching Fire ratcheted up from The Hunger Games, and I’d say Mockingjay ratchets up from Catching Fire. We’re getting closer to war. We’re not in the Games anymore. But it’s the same story and heading towards the resolution.

It must be bigger in scale than the first two films, which were primarily set in District 12, where our heroine Katniss Everdeen lives, and the Capitol and the Games stadium.
You get a whole bigger picture. At the end of Catching Fire, Katniss realises that District 13 hasn’t been destroyed, there’s a civilisation living underground. So we spend a fair amount of time in District 13, and we get to spend a lot more time in some of the other districts. We see some of the uprisings there. And finally, in Part 2, we’ll make our way into the actual streets of the Capitol. Part 2 is a war movie, and Part 1 is, in a weird way, a propaganda movie.

Katniss was damaged in Catching Fire. She must be totally screwed-up now!
Yeah, she’s worse [laughs]. Oh yeah. She’s not in good shape! But Jennifer [Lawrence] has a good time with that, and luckily for her, it doesn’t take too much of a toll because she’s able to jump in and out of it. Which is kind of amazing. Some people would have to live it all the time and they’d be miserable to be around for the whole 10-month shoot!

Cynics say splitting the Mockingjay into two films is pure commerce…
I definitely saw there was enough material and how distinct the two stories were. And having also spent time adapting Catching Fire, you realise how much is left on the table. Mockingjay is four hours’ worth of movie. And we have some world expansion, so there are some bonus things which aren’t in the books. Not changes – expansion, which we’ve worked on with Suzanne. She loves that stuff!

Losing Philip Seymour Hoffman must have been such a blow, both personally and for the Mockingjay films. He was great as Gamemaker Plutarch Heavensbee in Catching Fire…
He’s better in these. We had not finished but we were almost done. We had about eight days with him left, but the bulk of his scenes were done. It was tragic, and it threw everyone off for a long time. We didn’t shake the feeling off until we moved to Paris, and then Berlin.

How are you getting around the eight lost days?
We gave a few things to other characters, and we had some footage of him where we can make it feel like he’s in a scene where he’s not.

Finally, can you give us a hint, action-wise, of what to expect in Mockingjay – Part 1?
There’s a lot of action. We get to see more of the uprisings and there’s a rescue sequence that’s very cool – it’s in the book, but we got to expand on it. There’s a lot of cool, fun stuff. But these movies are very emotional too.

It's very interesting how he talks about Mockingjay Part 1 as a propaganda movie and Part 2 as the war movie. The book also seems to be divided kind of similarly, with the first part focusing on Katniss deciding to be the Mockingjay, realizing that people see her that way, and then actually acting as the Mockingjay. Does this interview reinforce your theory on how the Mockingjay part 1 is going to end?

The December issue of Total Film Magazine is out in the UK and select locations in the US now!

Thanks to Panem Propaganda and Quarter Quell for the heads up!
Posted by Janine at 10:00 AM