It is Week 6 of the Mockingjay Part 1 Countdown! Chapter 6 brings us directly after the filming of Katniss's disastrous first propo. Haymitch gathers a group of people, including her prep team and former citizens of District 12 and shows them the footage, proving it will be ineffective. He asks the group for examples of when Katniss has made them feel something real. 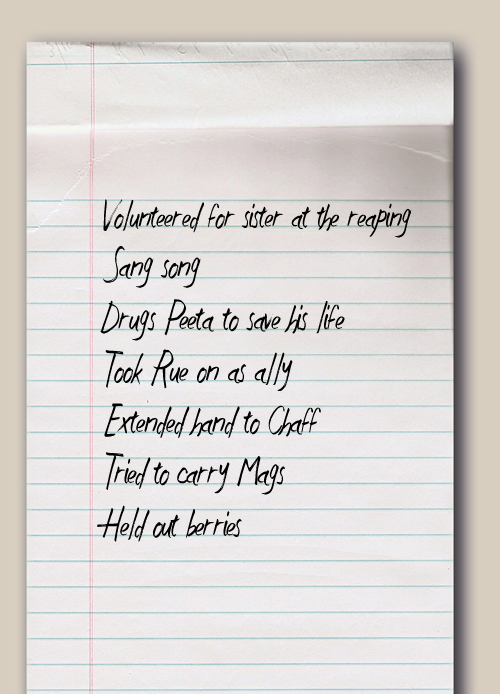 Together, they conclude that all the examples provided had one thing in common: they were unscripted and from Katniss herself. Haymitch proposes to film her while she's out in the field, and Coin eventually agrees and says Katniss can go to District 8. This scene has always felt cinematic to me, so I hope the brainstorming scene makes it in, maybe switching out the notepad that Haymitch writes on with a fancy schmancy futuristic blackboard.

Afterwards, Katniss and Haymitch confront each other about failing to rescue Peeta, and Haymitch reassures her that they still can save him. This exchange is one of my favorites in the series and is pretty essential to illustrating Katniss's main motivation of the first half of Mockingjay.

Beetee equips her with Cinna's designs, and in comes Finnick for one of his best moments in the entire series. Finnick shows up fresh from the hospital, upset that he is not allowed to come. Katniss successfully distracts him, and as he is off to see Beetee, Katniss points out that Finnick has forgotten he is wearing a hospital gown and slippers and suggests that he put on pants.

He looks down at his legs as if noticing his outfit for the first time. Then he whips off his hospital gown, leaving him in just his underwear. “Why? Do you find this”—he strikes a ridiculously provocative pose—“distracting?”

We are praying this scene makes it into the movie, as it is a character defining moment for Finnick and it creates a little levity for a generally heavy story.

The chapter ends with Plutarch explaining to Gale and Katniss the vision for the future of Panem, a republic that emulates our present day and their past. And then finally Plutarch gives Katniss the nightlock pill for in case she is captured.

While this chapter is light on the action, it's full of moments that feel so integral to the storytelling and the experience that is reading The Hunger Games that we're hoping this stays in the movie.

Join us next week for the next chapter!