Welcome to week 7 of our Mockingjay Part 1 Countdown! Chapter 7 is one of my favorite chapters of the book for a few reasons. I'm going to discuss them further later, but I am going to enumerate them for now because it is also a good way to summarize the chapter:

This chapter is so compelling and so action-packed, it reads like it was made to be turned into a movie. As you may or may not know, a good portion of what happens in this chapter is featured in the (which you can re-watch here if you need a quick refresher), so we know what to expect. Natalie Dormer being cast as Cressida was like a dream come true for me. In the TV shows I've seen her in, she's played incredibly smart, fearless, strong, somewhat calculating characters. The role of Cressida, the director/journalist tasked with following Katniss to film propos to encourage morale among the rebels, is somewhat similar to other roles she has taken on. A big difference, however, is the fact that the movie is set in the middle of the war. It will be interesting to see her in a setting that is somewhat grittier with a sense of urgency (the life-or-death kind). Mostly, I am looking forward to seeing how her relationship with Katniss is portrayed in the movie. Also, does she get to keep her accent? The District 8 hospital scene is one of the most compelling parts of the book. Katniss visits a hospital in District 8 and is surprised and moved by the rebel's reaction to her presence and the fact that she is alive. She then realizes how important she is to the rebellion, which, based on the teaser trailer, is (or will be) illustrated in the movie (since her realization was internal in the book)  when someone from the hospital asks her if she was there to fight with them to which she responds, "I am. I will."


After obtaining the footage Cressida's team needed to put together a propo, hoverplanes from the Capitol appear to bomb the hospital. Katniss is whisked away to ensure both her safety and that the Capitol bombers do not see her. When she realizes that the target was the hospital, full of injured rebels who cannot run, much less defend themselves, she takes it upon herself to fire back at the hoverplanes. Her and Gale manage to take a couple of the planes down, but the Capitol was ultimately successful and the hospital is destroyed, along with those in it.
The bombing is featured prominently in the trailer, and we see Katniss' bow and arrow, and Gale's crossbow, described in the book as a bow fitted with scopes and other gadgets, having been designed as military weapon. We can also clearly see them taking full advantage of their weapons' special features, as the arrows they fire cause considerable amounts of damage to the targets they hit. Long story short: their weapons are bad ass and I am excited to see more of what they can do with them!


Faced with the Capitol's ruthlessness and cruelty and with a little prodding from Cressida, Katniss films a response to President snow and the attack. If Katniss saying she is ready to fight with the rebels seemed compelling, her message to Snow is probably going to be compelling and a half! It will be compelling on steroids. "Fire is catching! And if we burn, you burn with us!" Thankfully (or sadly, depending on how you feel about visual spoilers), we will have to wait until the movie is out to see that particular scene. However, here's a little something I've drawn to show you guys what I think that scene is going to be like (I have a feeling this is exactly what it'll look like in the movie): 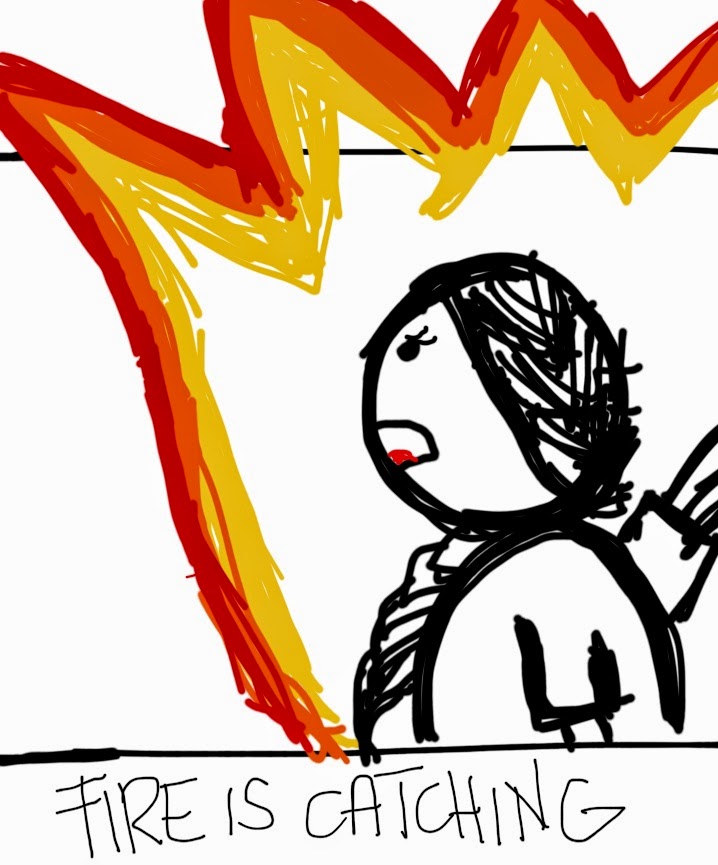 And that's a wrap! Join us again on Friday for the next installation of our Mockingjay Part 1 Countdown! In case you missed the previous weeks' posts, here they are: